Dont use your hand as a clamp when drilling!

Topics not covered by another category.

Dont use your hand as a clamp when drilling!

In case any of you ever thought it might be a good idea, let me tell you that using your hand as a clamp while drilling is NOT a good idea. I now have a 4mm hole in the middle finger of my left hand and red stuff all over my nice expensive gaboon marine ply.

I thought that sounded like the voice of experience.

Oh, and the same applies to nail guns!

Ditto on both the nail guns and the drills!!!

Then there was the moment of brilliance I... er, I mean "my friend" had and thought he would do just fine not checking for balance on a nice big walnut log moments before he turned the lathe on.

Or the time he thought he would be able to hold a hunk of steel down on the surface grinder... hey, that chuck is just a magnet, how hard could it be? YYYYyaaaaaa...

Or there is this scar from....

So far my worst mistake

So far my worst mistake just ate my workmate 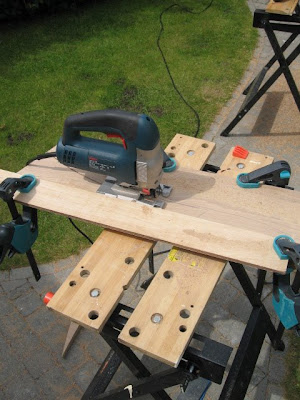 Luckily, epoxy can fix that. I'm not so sure that epoxy would be any good for filling the hole in you finger. 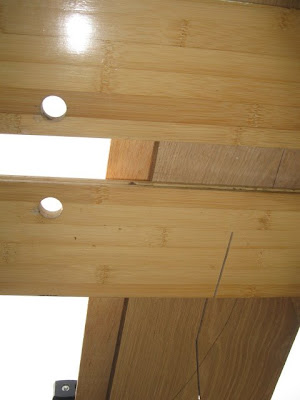 Hey! I built a boat ! No Really, I did !
http://davesboat.blogspot.com/
Top

Re: So far my worst mistake

Rational Root wrote:Luckily, epoxy can fix that. I'm not so sure that epoxy would be any good for filling the hole in you finger.

Maybe not, but in an emergency I've used super glue to pull the sides of a wound back together even if it was bleeding. When I worked in the construction trades, it wasn't unusual for me to run a nail though my finger from the nail gun in the rush to complete a project. (meaning we needed to get paid.) So I'd pull the nail out, flush the wound with some peroxide or rubbing alcohol, pull the skin back together with the super glue, wrap it up and get back to work.


upspirate wrote:Ditto on both the nail guns and the drills!!!

The most common way a nail gun will get you is when the compressor is running low on pressure. Maybe the power cord inadvertantly got unplugged. So you're holding the piece of wood you want to nail with your left hand and pushing the nail gun against it with the right hand. You pull the trigger only to find out that there isn't enough pressure to drive the nail home. But the gun bounces back and because you're pushing it forward, before you can react, you've pushed it back forward and it gets your left hand. In the nail gun's defense, we used to modify the guns so that you only had to hold the trigger and bang the nose of the gun against the wood to get it to fire. That saved a lot of time in construction but created a situation where our fingers could get nailed if they got in the way. Nowadays, the guns are alittle more sophisticated so that we don't let our stupidy bite us so easily.
Isn't it amazing!! The person that never has the fortitude to pursue his own dreams, will be the first to try and discourage you from pursuing yours.
Top

I don't think anyone at the Gathering even noticed when I went around meeting people and shaking hands that my index finger doesn't bend.

They re-attached it nicely but it won't bend the same any more. I don't think superglue would have worked on that.

When I went to the emergency room, the admitting nurse told me not to worry and that I would be fine. I was the 3rd severed finger they had that week!

I immediately sold my table saw that did not have a guard and bought one that did. That guard lasted about 2 months before I removed it too - I hate those things. I use push sticks now.

YOU were at the Gathering?

Man, I'm telling you we ALL need to do boat cards for next year. It is just so difficult to put names with faces, projects, and avatars unless we do something to make it easier.
Isn't it amazing!! The person that never has the fortitude to pursue his own dreams, will be the first to try and discourage you from pursuing yours.
Top

A "clean" form of super glue is now used to seal wounds, replacing stitches. I am like Dave and used super glue in the past to seal a wound.

Worse thing that I did was hold a piece of hardwood floor in place, pulled the trigger and nail hit subfloor nail and curved right back into finger. Pulled it out and finished floor. About 2 years later, the bone chip worked its way to the surface and dug it out.
Top

OK, so now I've read all your great stories, my finger injury doesn't seem to come up to the required standard, so I felt I had to throw this one in too...

When I was about eleven years old, I was out fishing and somehow managed to drive a big fish hook all the way through my first finger. When I went to get it pulled out, the barb on the hook meant it couldn't go out the way it came in. The nurse had to pull the hook all the way through the other side with a pair of pliers. My adult self would probably demand full general anaesthetic for the same thing now! I reckon they thought that an eleven year old kid wouldn't feel the pain.
What's the rush? Getting it finished?!
Zip project started: January 2008
Project site: http://www.hartdale.co.uk/blog/
Top

I was the guy with the Blue and White Tubby Tug.

That hurts just to think about it.


BulldogBoater wrote:I am so hurt that my presence at The Gathering was not such a memorable event for all that I was not forever imbedded in everyone's memory

I was the guy with the Blue and White Tubby Tug.

SEE? THAT'S WHAT I'M TALKING ABOUT! I remember your Tubby Tug 100%. I've got photos of it. We need those boat cards so that we can put names with faces.

BulldogBoater wrote:I am so hurt.....

Isn't it amazing!! The person that never has the fortitude to pursue his own dreams, will be the first to try and discourage you from pursuing yours.
Top

I'm jealous... I have never owned a workmate with a bamboo lam top!

Must be an Irish version!

And you go chop it into kindling, geesh.
Top

I made quite a mess with the red stuff trying to find the bone from the end of my finger in the dust bag from the saw.
Never did find it. Lucky that I had a "flap" of skin left on the side of my finger, which was sewn over the end.

OK, Sit down and open a beer for this one:

When I was in the Navy,I'd go at lunch time to the Hull Technician shop, they were teaching me to weld. There, I knew a guy who would not even if ordered go near a grinder. As a welder he was done. When questioned by his Senior Chief as to "Why his job wasn't done?" He replied "After what happened, I'm never touching a grinder again!" OK, so what happened? On his previous ship, he'd been grinding a plate on the bench, when finished he set the grinder on the bench top. The lock was inadvertently turned on. The grinder sped across the bench, and cut through his pants, and a very serious piece of personal skin.
Did you know a persons testicles can still be attached and land on the deck?
The Senior Chief said he "Understood"; While we, listening all gasped and gaped. Senior Chief Mitchell went on to tell the story of the young Fireman- or engineer who- drilled through a steel plate held in his lap and got himself wound up into the drill. When medical help was called- they advised "Putting the drill into reverse". "It was already tried. Came the reply! "You're not joking?" was the response. "No, this is not a joke!" The young man was carried to the hospital in a canvas stretcher. I don't know what became of him. or the drill.
I stopped trying to learn welding that day.