Outboard designs up to 14'

I read an article recently about a Glen-L Zip that nearly lost it's motor and transom in transit. It was equiped with a vintage Merc 75H and was being trailered to Florida from Wisconsin. Eight hours into the trip it was noted that the transom was pulling away from the attach points on the boat. A transom saver was not being used. After reading that I decided to add that extra bracing to my motor well and I surely will use a transom saver. I know nothing more about this boat or the extent of the damage. It was repaired enough in Florida to allow the motor to be hung back on for show only. Don't know if the builder is a member of this forum, either.

Isn't that a whole lot of weight and well over the design spec?

Also, was the transom in any way modified.. did it have a proper motorwell.. how was it held together?

I doubt its the boat design failure.. escpecially given the oversizing of the engine and the distance. Also, without viewing the trailer.. we have no idea if bunks extended any support to the transom or not.

I will bet its 'fixable' regardless. I'd like to see a link to this article.
Ian (aka Iggy)
My Malahini Build
Top

There is a gent built a 'stretch' Zip - I believe he added 3' or so to the length. Single rear cockpit if I remember correctly, was running increasingly bigger old Mercs. Be a shame to survive the water and be victim to the road.
This is my first, last and only boat build.

I would love to see the article as well. Might shed more light on why the failure happened.

The thing I hate with experimenting outside of the intent of the original design is that when a failure happens the name of the original designer is the one with a black eye because the boat is often still referred to by the name of the design which the modified boat was based from. Thats just not fair to the design(er)
Zip build
http://www.vupilot.blogspot.com
http://picasaweb.google.com/vupilot/Chr ... -O0x7SvsQE#
GlenL Utility
https://plus.google.com/photos/11285674 ... banner=pwa
Top

Stretching the boat length also would seem to be to carry some risks never intended by the original designer.

My concern with these kinds of 'special circumstances' is when amateur builders like myself get wind of them and perhaps.. some times.. try to take a few extra precautions that probably will never apply to a properly build and powered boat.

If the ZIP had a flawed transom design.. I would think it would have came up years ago (not 50 years later) and after the first dozen or hundred built (definately a very popular model). I would imagine Glen-L would have been notified and designs changes.. again provided things were being done PER design.

Now, I cheated by +5 HP on my engine HP... but I also built the motor well and reinforced my transom per Glen-L recommendations and did not cut any corners. I also didn't stretch my boat because it was not recommended.. so I am not messing with that.

And even with all that.. if the owner simply would have recognized that he/she is transporting it a LONG way with an oversided engine and perhaps and overstretched hull design.. that a transom saver or some other reinforcement would have probably prevented the damage in the first place.

I hope builders read this and take it as a cautionary tale about oversized.. overstretched.. and poorly transported rather than a design/transom failure. That was just the symptom... it was not the flaw itself... most likely.
Ian (aka Iggy)
My Malahini Build
Top

I hope I didn't unintentionally impugn the design of the Zip. I think the way it is designed is perfect. The article of the boat in question was merely a blurb in our ACBS chapter newsletter with no additional information other than what I relayed here. It does not mention who the builder was. My intentions were to alert people about hanging large motors and not properly supporting them for transit and to ensure you properly brace the transom if you deviate from Glen-Ls design. The article clearly blamed the lack of a transom saver as the cause of the damage. Any properly designed boat could fail if abused or improperly built. Hopefully, the owner/builder frequents this forum and could further enlighten us.

When I built my motorwell, I did not run the plywood down to the battens. My fix was to add bracing to the sides of the well and run them down to the battens. That is why I reposted a pic of my new bracing on my thread. Since I deviated from Glen-Ls design, I wanted to substitute some bracing that will, hopefully, correct any deficiency I may have had in my design.

Repost of how I added bracing to the motorwell.

Roberta,
I added a brace on each side of mine as well. I also added addional braces that run atop the battens to the frame. I also have a long adjustable transom saver.

I wake up with a 16ft woody every morning

That looks good to me , Jeff. I think the way Glen L has it in their motorwell mod is excellent. I Did mine slightly different to accomodate some accessories and accessability. I think I have fullfilled their intent for structural integrity.

When we built the motorwell into our Zip, we left the transom knee at full height and allowed it to extend through the motorwell bottom. It required a little more fitting, but in applications such as this, a longer moment arm is a definite advantage structurally. Also, the decking that surrounds the motorwell "closes the box" by capturing the top of the transom. Load will always follow stiffness. If the guy with the Mark 75 did not do this, it's possible the extra weight of the motor contributed to the failure, but I would also be curious about other variables, such as trailer spring rates, and any other factors that might cause additional road shocks to the boat's structure.

-Mark Shipley
A boat is just a wooden box with no right angles.
Top

I'm with Mark. If you're going to hang almost twice the engine and perhaps bounce the boat an hard springs ...

Hey upspirate, that's the one I mentioned earlier in this thread. Believe it was a 'stretch' ZIP. He's in the ZIP owners pics here at GlenL.
This is my first, last and only boat build.

Yep,cool boat and was supposed to be at The Gathering last year, but didn't show up.
Top

I think I may have seen the problem boat at the Mt. Dora Wooden Boat Show this March. I came across it just as the owner had been told he had an emergency at home and was pulling the boat from the show. He reportedly paid $6,000 to have this boat built by Sorensen Marine, on the West Coast. He specfically asked me about the transom knee because this boat had been built without ANY!!!! The interior was not finished out and the owner complained about the clear varnish and said he had to add 6 more coats to a supposedly finished boat.

So to summarize: this boat had no transom knee, was headed to Wisconsin, and had a 75hp Merc on it - I'm guessing this is the boat with transom problems.

Bottom line - build the boat to plan, keep the moter to spec, and go boating with confidence, Glen-L knows what they are doing.

Here are a couple of pictures I took as they were getting ready to move the boat. Wish I had more time because I would have liked to have taken one of the transom. 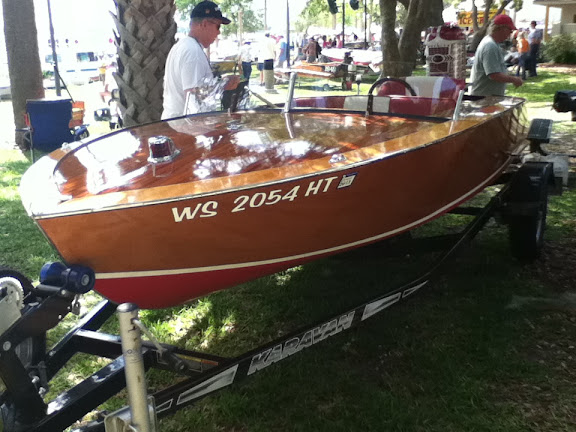 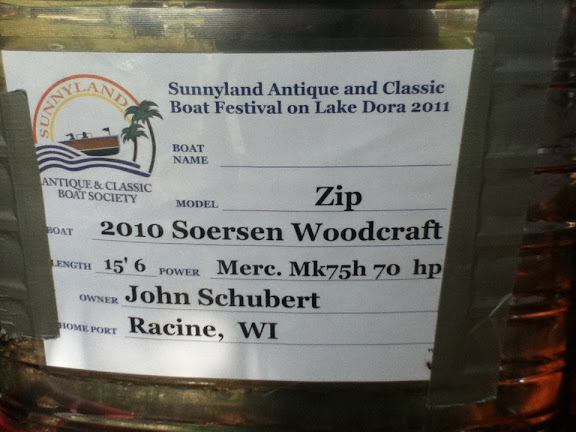 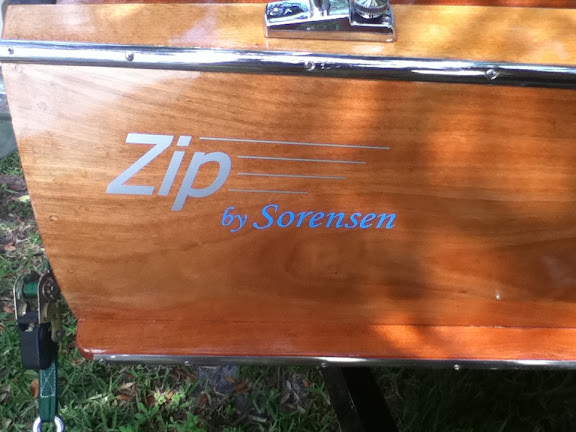 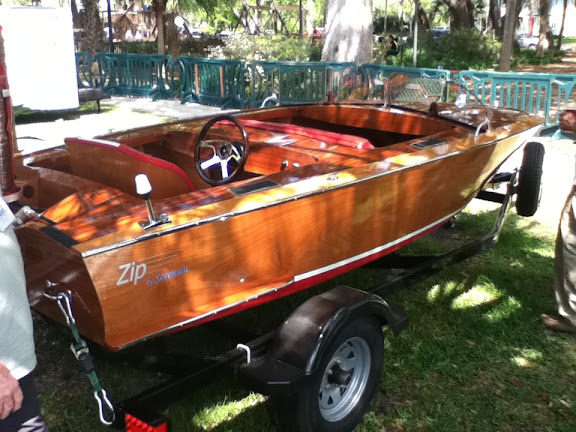 The best part about a manual screwdriver is not needing to remember if you left it in reverse.

Completion is but one step in the process and not one bit more important than the others.
Top

What a shame!!! I think I may have met this individual at the Pewaukee, WI boat show last year. I talked to a man there that was going to have a Zip built. Almost seems that 6K would not be enough for a properly built and finished Zip done by a "professional". NO KNEE!!!! Yikes!!!!

Anyway, was this the Tavares Boat show? The article I have said the Zip was going there.