Outboard designs up to 14'

Yes, you do have a great start with setting your chines. You're doing fine.

I agree with both PeterG and JimmY that you should completely finish installing the sheers (on both sides) before bothering with the chines. It will give you a much better visual reference for trying to get this "chine twist" right.

When positioning the chine, you want to make sure there will be enough wood on each of these two planes for the planking to attach. I would also add... don't over-think it. You're obviously paying great attention to detail as you look ahead in your project, and you're certainly approaching the chine installation with a much better understanding than I did. But even if you don't get this chine twist "right" the first time, it's nothing to worry about. As Matt mentioned, many of us have had to laminate more wood to the chine afterward in order to get a good bevel for the planking. I did. It's no big deal, and it's easy to do. Not only that, but imho it results in a stronger chine anyway.

There are plenty of references here on how to do that.

For now, I'd just work on finishing the sheers.
"How long does it take to build a boat? Until it's finished" — yours truly
Why did the boatbuilder get a divorce? Because he didn't have enough clamps to hold his marriage together!
Top

I think your over thinking it at this point. Its pretty simple seeing your most recent photo. In your last picture I would simply have someone twist that big C clamp just like your hand is on it, push down where your hand is and up on the inside to twist the chine a bit clockwise as viewed from the photo, so the end of the c-clamp rotates about an inch to inch and a half or a moderate to light tension. While the helper holds the twist just grab a normal hand saw and lay it flat against the side of the stem and simply cut the end of the chine using the stem as a guide for your handsaw. There is a picture showing this method on page-135 of the Glen-L boatbuilding with plywood book.
Zip build
http://www.vupilot.blogspot.com
http://picasaweb.google.com/vupilot/Chr ... -O0x7SvsQE#
GlenL Utility
https://plus.google.com/photos/11285674 ... banner=pwa
Top

Another way to look at it is just pull the end of the chine that sticks out past the stem up the stem until there is moderate tension on the chine, It might come up 2" or just till there is tension but not so much it comes unclamped back at the frame. This tension should curve and bend the chine slightly between the stem and the next frame aft. Then use a handsaw held flat against the stem side as a guide and cut the chine.

The chine falls where it falls really and just a little tension helps it have a nice curve. Fairing is really where you get the planking to match up from stem/keel to chine and chine to sheer. Dont worry too much about it at this point.
Zip build
http://www.vupilot.blogspot.com
http://picasaweb.google.com/vupilot/Chr ... -O0x7SvsQE#
GlenL Utility
https://plus.google.com/photos/11285674 ... banner=pwa
Top

Just wanted to say thanks to everyone for the help and suggestions -- been very helpful.

vupilot -- My biggest issue was getting the twist right. As pictured is the point where it lined up most closely with the sheer -- but the problem I had is that twisting the chine enough to get this result gave me way too much twist at the most forward area of the chine, the side planking would have been close to parallel with the breasthook. So I'd have to fair it a lot, and it would be difficult to attach the bottom planking I think.

Ultimately I decided to purposely go with quite a bit less twist than needed, and shim later. The main reason being that while the twist isn't enough, it's pretty consistent across it's length, so will be easier to shim that way I think. Aiming for a similar result to this:

I've got the first lamination of both chines on now, though one exploded after a few hours, and the other had one glue joint fail after a couple days. I've got everything reglued and clamped as well as I can, so hopefully it remains stable until I get the second lamination on, which I expect will reduce the chances of random wood explosion. Glue joint ended up sloppy at frame 2, so I've added little chine blocks at frame 2/chine, which will hopefully make up for any weaknesses in the joint.

I'll throw some pictures up later on, assuming I don't get any more splintery surprises. Looking forward to the sheer, as I had a much easier time with that last time round.
Top

Almost everybody has a chine or sheer break. If there is any imperfection in the grain of the wood in that forward area that's where it will break. The laminations do help to stabilize each other. Once the planking is on the boat will be one solid unit.
Matt

Yeah I was expecting it really. (This is number 2)

If they have to break I just wish they'd always do it during the bend and not after settling for a couple hours. I'm really hoping the two I've got on now hold until the laminations on, as it'll be a lot harder to deal with now that they are glued and screwed. It's been 12 hours so I'm hopeful that they are ok. Grain is looser than I'd like, but best I could get.

Picture is before the second lamination was finished, but shows curve, which I think turned out well, seems consistent on both sides. Definitely needs more twist up front, but wasn't able to get a consistent twist along length, so deliberately left it like this, as the inadequate twist is fairly consistent across the length, and will hopefully make shimming easier.

Also shown is the 'think about mistakes' chair. 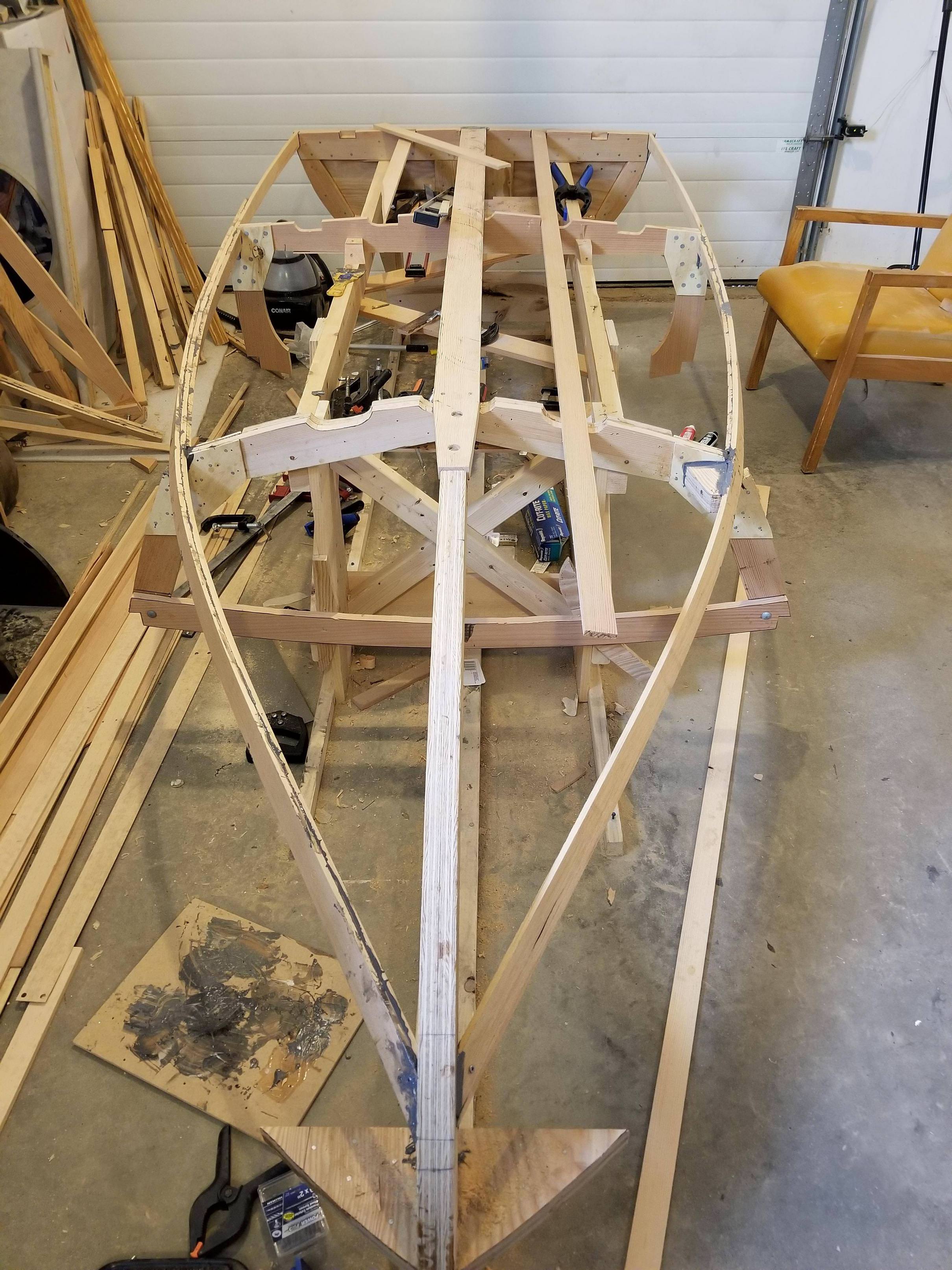 Taking a break due to sheer frustrations. Broke 4 so far. I'm down to 1/4 inch laminations, but might have to go to 1/8 which is what I did the first time around. DF doesn't bend as well as I'd hoped. Even bought a steamer too.

Regarding the chines, is it a problem that they are largely straight after about midway from stem to frame 2? They don't dip inwards, but after settling into their bends there isn't really any curve to them for the last bit. I see in the plan that the chine is heavily curved between stem and frame, but can't seem to find a way to make that happen.
Top

Regarding the chine. Did you first attach them at the stem then bend working aft? Or did you work from the transom and work toward the bow, attaching at the stem last? They usually will get a better bend up forward buy attaching at the stem first and bending working aft. It requires a bit more room on the sides of the project in your shop so its not always feasible. The straightness is not really a problem, it might be barely noticeable in the end product but not a problem.

On the sheers again I suggest working from the stem first and working aft, you can clamp/bungee the sheer a little at a time over the course of a couple days if needed. I wrapped towels around mine and soaked them in boiling water while bending slowly, progressively tightening the bungees and clamps more over a couple days. I had to unbolt the form from the floor and move the project to have enough room away from the walls to have the sheer sticking way out to the side from the stem.

Hi vupilot. I actually started at both ends at once for the chine. Wasn't able to get 12 ft boards, so I have them joined between frames 1 & 2 via a full length butt block. I clamped the ends and met in the middle. Second lamination was from the stem aft.

The sheer I'm trying from the stem, first with a couple 5/8 boards, then moving to 3/8. Trouble I have is that I get them in place ok, but they break after sitting a while. I'm currently planning to do the first lamination in 1/4, then 3/8 for the next two. I'm hoping that having something to support the full length will make breakage of subsequent laminations less likely. At least DF is relatively cheap.

The wasted glue probably cost more than the wood.
Top

I suppose the DF is all you can get where you are? I wound up using mexican purpleheart because my local supplier had it in stock in 16' lengths. It worked really well. I used two laminations and didnt have any break. Its a bit harder and takes longer to fair and sand but otherwise I loved it, a super dense strong wood.

There are a handful of truly challenging tasks in the build and installing the chine and sheers is one of them.
Zip build
http://www.vupilot.blogspot.com
http://picasaweb.google.com/vupilot/Chr ... -O0x7SvsQE#
GlenL Utility
https://plus.google.com/photos/11285674 ... banner=pwa
Top

It's not all that I can get, but it's the least expensive and being a newbie I didn't really want to go with any wood that isn't commonly used.

I can get African mahogany but it's extremely expensive, and always seems to be super warped with wobbly grain. If I'm lucky I can also get Sitka, but it makes the mahog look cheap, and is only available rough. Local woods would be alder/ash/elm/bur oak -- but I"m not sure if any of those are suitable.

I've got the first lamination down without breakage. Used 1/4 which is thinner than I'd like, but I intend to do 1 more lamination at 1/4 to get it up to 1/2, and at that point I'm hopefull that it'll be supportive enough to get the next two on at 3/8 to bring it up to thickness.
Top

Finishing up the final (of 4) sheer laminations now, came out a little sloppier than I'd like, but it's symmetrical and for the most part has clean contact/bond throughout. I'm hopeful the rest will clean up in fairing.

Next up will be some substantial shims to the forward portion of the chine to alter the angle.

On that note, is there some science behind getting this angle right? From other threads it usually looks to be angled so that a test piece mated firmly rests on the sheer in a strait line. Is this correct or do I need to angle it to account for curvature of the plwood? 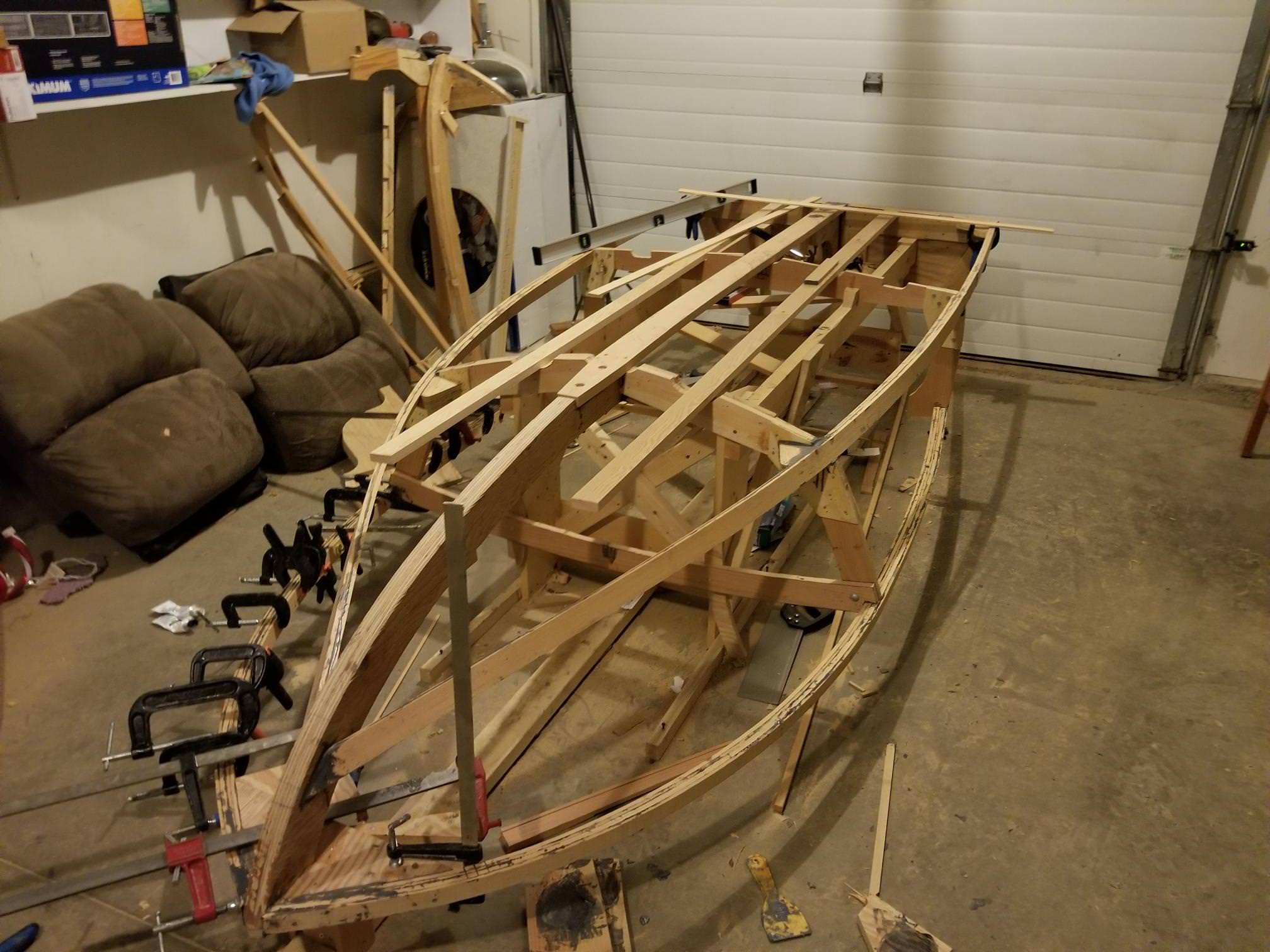 How thick of a shim needed will be obvious as you fair the sheer back. Make chine shim thick enough so you get a good contact surface for the planking to secure to. My Squirt chine wasn’t perfectly faired so after the flip I filled the gap with the ever popular thickened epoxy.