hoodman wrote:I get what ya mean, Carl. I think, though, with a scarf joint on the bottom panels you wont have to worry about leaving a space for limbers in the butt blocks although its probably not that big of a deal now that I think about it. The bottom skin will be less that 16' on my boat. will yours have two joints?

I would need two joints. Initial panel length is 24 feet long. (before trimming to size). But its the gluing up that really scares me. It was hard enough just getting through an 8 foot panel on the sides while worrying about the epoxy setting up and trying not to get epoxy all over everything. I like to allow enough time to scrape excess epoxy off after installation so that adds to the time needed.
Carl

hoodman wrote:Had an uncle tell me over Christmas that once the baby comes "you'll never get that boat done." I guess I get to prove him wrong. Just waiting on the next warm spell to get some gluing done. Looks like Sunday into Monday or so we'll have some highs in the 50s. Gonna get cold coming up tomorrow though.

You've gotta get mama out there to help move the ball down the field before the baby comes!

I had to add 3/16" to the chines to make them the full 1" (net) called for in the plans. Ready to start fairing the chines in the aft area of the boat. Next step is to add the second lam to the sheer.

Starting to look like a boat Matt. I remember being at that point a bit less than a year ago.
Carl

I am doing fine. Our son came 10 days earlier than his due date and I hadn't finished painting his room yet. Both grandpas helped me get that done. Since then we have been pretty busy feeding the baby, etc. I had been busy before then adding a dishwasher to our kitchen and re-plumbing and new electrical in our laundry room. Next project is a new septic system but we'll be paying someone else to do that!

I have started fairing the boat but not gotten very far. Things are settling down at home so sometime soon I should be able to finish adding the second lam to the sheer and fix where the sheer has broken forward of frame 5. What happened is that after attaching the sheers I noticed that one side had a larger radius (stuck out more). I checked the plans and carefully measured and got up on a ladder to look down and re-checked the plans and got back on the ladder. I finally decided to try to fix it and since it was before I had added the second lam I came up with a plan. I cut a notch in the first lam and when I sprung the second one into place I was able to pull it in far enough to make it come a lot closer to matching the other side. But there was a bad place in the grain on the second lam and it broke about a week after glue-up. I'm planning on adding another lamination to the inside of the sheer up forward and smearing epoxy all over where the broken section is. I was disheartened at first but it will all work out in the end.

Too bad about the break.When I laminated mine,I used thinner pieces than plans called for and used more of them to get the total thickness.didn't have to steam bend even.maybe if that break is in a spot that don't show,you could put more lams behind or fit in between.
Working on regular-sized Bo-Jest

Yeah, it is in the bow section so another lam on the inside will be under the deck and never show. Once the deck and side plywood are on nobody will know but us

Hi Matt, been following your build as I'm building Geronimo too. Don't get down about the break it's fixable. One thing about white oak is it bends real nice' I wrapped my chines and sheers in towels, tied on tight, and poured several kettles of boiling water on it, left them overnite and couple days later when the towels were dry voila, they were bent. However I had a couple cracks in the forward bottom panel (joubert okoume) - I had the bright idea to leave a foot long 'handle" on the forward corner - so I could put a clamp on it and tie a rope to it to pull and bend it - even though I had laid hot wet towels on the ply to ease it, as I was tightening the rope there was a bang like a clap of lightning and I snapped off the forward corner of the ply. But I fixed it, all you see is a hairline crack. Careful with the forward bottom panels; I've noticed tiny cracks near screws up forward.
I've got the hull all sheathed now, and after a final 120 sanding I'm going to encapsulate it with 2 coats of Silver Tip resin before the glass.
I did a lot of research on scarfing plywood panels but finally ended up doing butt joints on both the bottom and the sides, for one thing working alone it's far easier to put on an 8' panel than a 16'. And they came out just fine - if you close your eyes you can't feel where the joints are. I don't use power sanders on the hull - I use "sanding boards" - I have a variety of 3" wide by 24" long plywood boards, either 1/4" or 3/8" thick - I buy 3" x 24" belt sander belts, cut them open and use spray adhesive to glue them onto the boards so they can be peeled off - boards have handles front and back like a plane - works really well, boat is nice and fair with sharp edges - thanks to Bob Brandenstein in Missouri for that idea (Bob's Malihini build). Bob

Thanks, Bob, your boat is looking great!
Matt

I didn't have too much trouble with the sheers, primarily because I used my steaming setup and pre bent the lumber before doing the final install. Now, the chines, well that is another story. Glad I am well past that point now.
Carl

If I had not cut the first lamination to bring the sheer in I doubt that the second lam would have broken. Just a combination of things led to the failure. I was already planning on adding another lamination to the inside of the sheer but when I went out about a week later it had broken. I should have paid attention to the grain in that spot a little better. There is a little hook in the grain right where it broke. I did not have any problems bending either lamination on the other side and the chines were easily bent too. I didn't use steam or hot water, and it was cold (50s) when I did the bending.
Matt

Got a new fan for the shop since I'm going to be planing etc. while fairing the hull. That should make activity in the shop a little more bearable. I also have some new shop lights to go up I've just not had a chance to hang them. That will be really nice since I just have 8 3 foot bulbs lighting the whole place. This will up it to 16 4foot t8 bulbs. Got a few other shop upgrades to take care of too.

My dad was visiting this past weekend and he helped me get the sheer fixed with a lamination glued on the inside. Used ratchet straps to hold it all close to where I wanted it and clamped it all together. The pictures will describe it much better than I can. It worked out well I think.

Here is everything strapped and clamped up. I found out that epoxy doesn't stick to nylon straps: 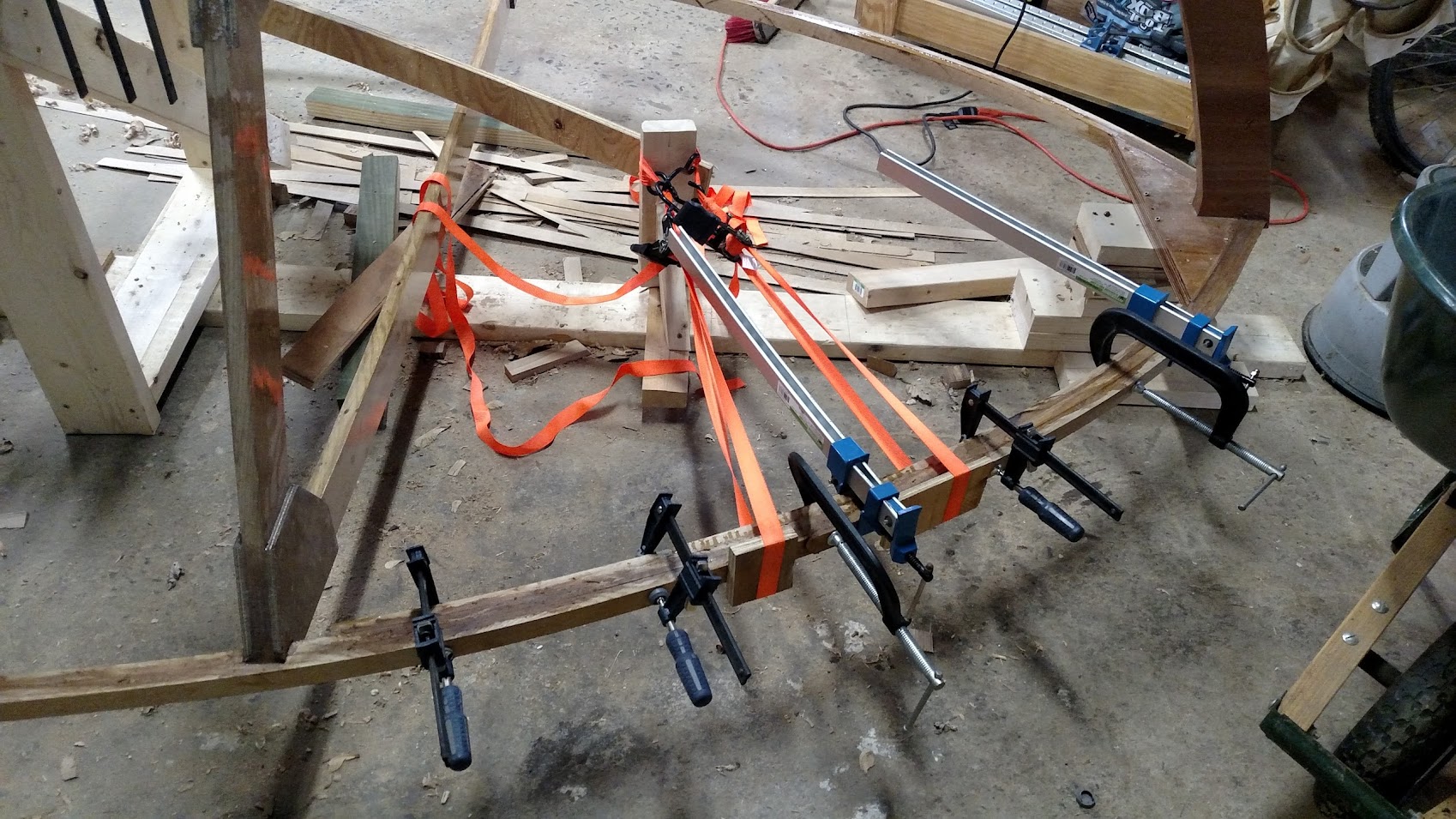 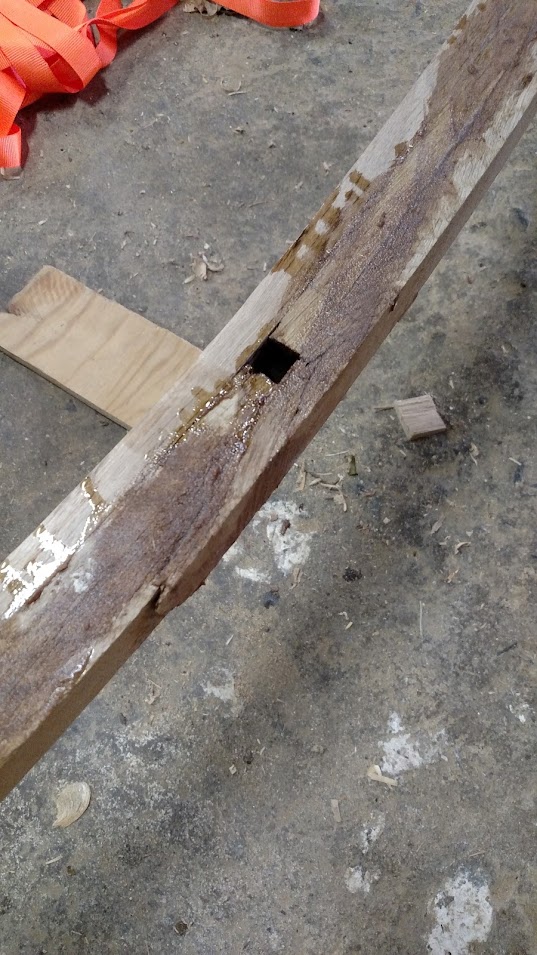 Looking good -a little grinding and as good as new.Read somewhere that laminated wood is stronger than solid wood.You should not have any probs now.
Working on regular-sized Bo-Jest