Making progress on my Monaco.

I`ve said it before... Damn you do nice work.

Skip, you're boat is looking fantastic.

I'm still amazed every time I see how clean your shop is... With all the sanding you say you do, I swear you must have a saw dust eating gremlin around that cleans non stop.... Sorta like one of those pool sharks that just does it's thing when no one is looking.

Anyways, I can't wait to see more updates, your work is fantastic.

Thanks Sean! I have over 1000 hours into my build now, and I think 200 of it was just cleaning up the sawdust! With the tile floor the sawdust makes it very slippery, so I try to keep up with it. This week I started on the plumbing and gas tank mounting. Mounted a bilge pump by the transom and one in front of frame 5. Mounted the strainer and roughed in the hose and the flushing tee. Built a frame for the gas tank to sit on. That brings up a question. Do I just sit the tank on the plywood or is it better to put a little foam padding under it? I will use straps from the rudder bracket over the tank and down to the steering support and it will all be removable since it really makes access to the rudder stuffing box and the steering cylinder difficult. I am also using blocking on the motor stringers to keep the tank from moving side to side. I am going to use the graphite type stuffing material and hopefully that will limit the need to get in there very often. Skip

Here are the photos of the gas tank mounting. Skip 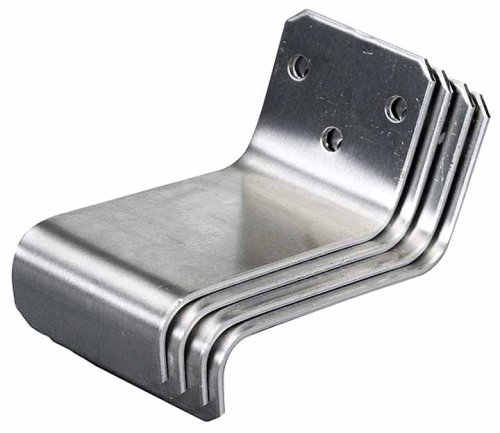 I used those clips in the Torpedo. The kit comes with 4 clips. I only had two points on my 40 gal. tank so I used two clips per point and three # 12 screws in each clip. Been holding just fine.

You may need to increase the size of the platform to use the clips, however. If you use the straps, make sure you add some blocking to prevent the tank from shifting.

Take care with the water inlet routing over the stuffing box. Make sure there isn't contact. Vibration from the stuffing box will slowly eat away at the water hose. Rubber hose should either be held fast or left to hang in the air - not rub against something.

If you need to pull the tank once the rear deck is on, how are you going to loosen the rear clamps?

Suggestion - have a metal strap made that is fastened to the rear of the tank plate, goes over the top of the tank, then a separate part that can be removed from the front. That way the tank will slide out. Also make sure all the hose connections can be accessed once the rear deck is on.

(Bow to the right - black lines are bolts.).

The top left corner of the green strap can be hinged as well.

Thanks Billy, Roberta, and Sands35. I originally bought the clamps as you showed, Billy, but then realized, as Sands35 mentioned, that there would be no way to remove the rear clamps once the tank was in place. Moeller also sells a strap version, which I bought. It is just like your drawing, Sands35, except the connection point for the two straps is on top of the tank, not in front of it. The straps weren't long enough to do as you suggested, but I have good access to the connection point on top of the tank. I will just have to make sure I run the tank almost empty if I determine I have to remove it! I had planned on clamping the water inlet hose to the frame, so I will make sure it is high enough to clear the shaft log. Thanks for the suggestion. Skip
Built the Glen-L Monaco, 2016.
Top

Here are a couple of photos of the tank mounted using the straps. Skip

That will be just fine!!!

Roberta wrote:That will be just fine!!!

mechanicals are really coming together!
just one follow up on the SS tank clips. you do not need to remove the rear clamp only the front and tilt the tank slightly up and out.
(insert Witty phrase here)
Billy's Belle Isle website
Top

Very nice and clean work Skip. You've made significant progress since a few weekends ago. Now that I am back from my Alaska trip, I am anxious to start back up on my boat.

But I continue to look forward to seeing your work. It reminds me of the that fellow on the New Yankee Workshop on public TV. His work, like yours, is a shining example of quality work for other's to use as an example.
Carl

That you Carl. Norm Abram (New Yankee Workshop) has been an inspiration to me for many years. I wish he was here to help with installing the decking on my boat! Skip
Built the Glen-L Monaco, 2016.
Top

I got a little more done on the boat this week. Little things that seem to take a long time. I installed the fuel hoses, fuel shutoff valve, and the gas/water separator filter. These required mounting blocks which had to be coated in epoxy. I am going to install a remote fuel shutoff in the front cockpit. It will close the fuel shutoff valve by way of a cable. Then I worked on the fuel tank vent system. I decided to install a activated charcoal canister in the vent line to eliminate any gas smell. That involved another mounting block and more epoxy. The scary part was installing the vent through the transom. It meant drilling into my finished transom. After a lot of sweating, I was able to drill the hole. I will have to do two more holes like that, one more in the transom and one in the side of the hull up by the front cockpit for the bilge pump outputs. Not looking forward to that either! I have a question about the vent hose. The one I got in a fuel tank installation kit from Moeller has a 1/8" thick wall and is very stiff. I don't see why it has to be so thick. It makes it difficult to bend in the tight areas near my tank. Is it alright to use a thinner wall hose for a vent hose? Skip