Anyone attending? Anyone showing?

My little boat is entered! I don't expect to win anything, I'm just looking to have some fun with fellow boat enthusiasts.....
Top

I might go. Don't know if Lisa has made other plans yet.
Bryan

Well, I sure hope you can make it!
Top

First of all DrBryanJ, thanks for stopping by!! Great to see you! Hope you had a good time at the show. Awesome boats, huh?

Next: I almost didn't go. The weather forecast was simply ghastly. Thunder & lightning all day. But aside from a 5 minute sprinkle around noon, there was no rain at all.

Finally, they classed my boat in the "outboard class"...a class they don't typically judge because very few outboard boats are typically entered. Usually outboards are lumped into the "special class", but since there were nine outboards, they put us all there, irrespective of the boat's age. Because of that, I was up against some very stiff competition, but managed to win 2nd place! Amazing!!

I entered this show just for the fun of it, and never expected to win anything. Nobody was more surprised than I was when my boat's picture was displayed on the big screen and my name was called. And while I was being presented with my plaque, the head judge mentioned to the crowd that "In case you didn't know, Mark made this boat from scratch!", and he told me what an outstanding job I had done. The crowd reacted very positively. Pretty awesome experience, really. 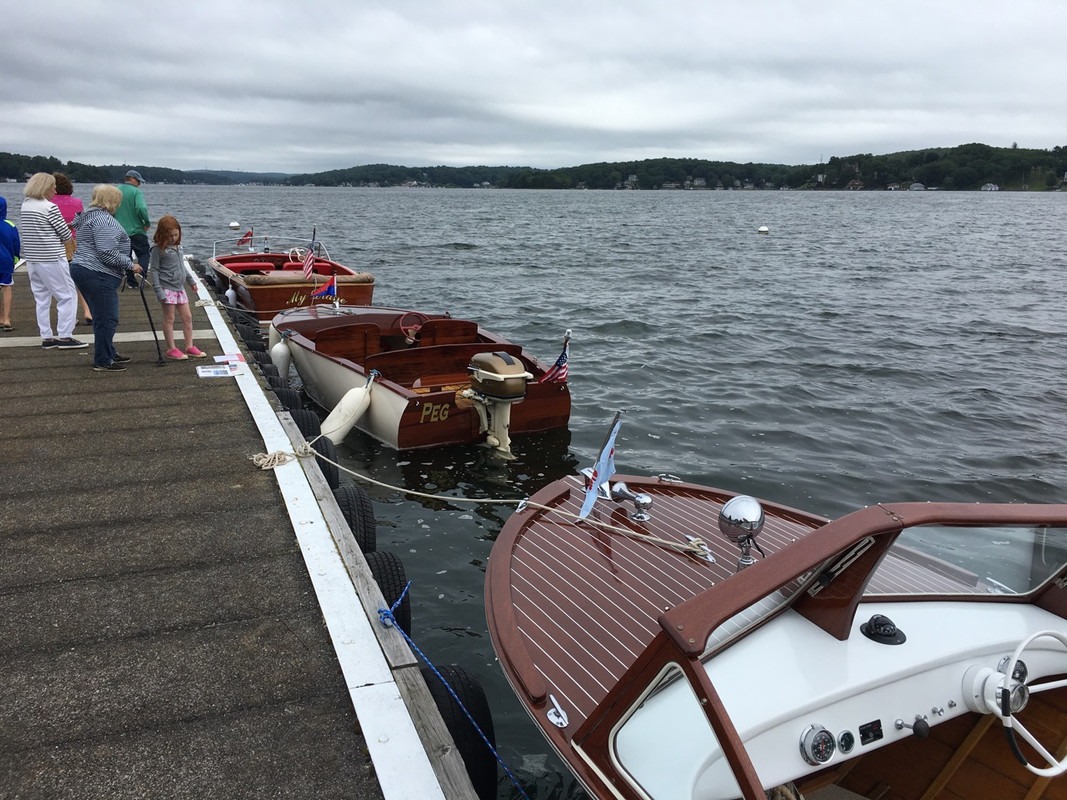 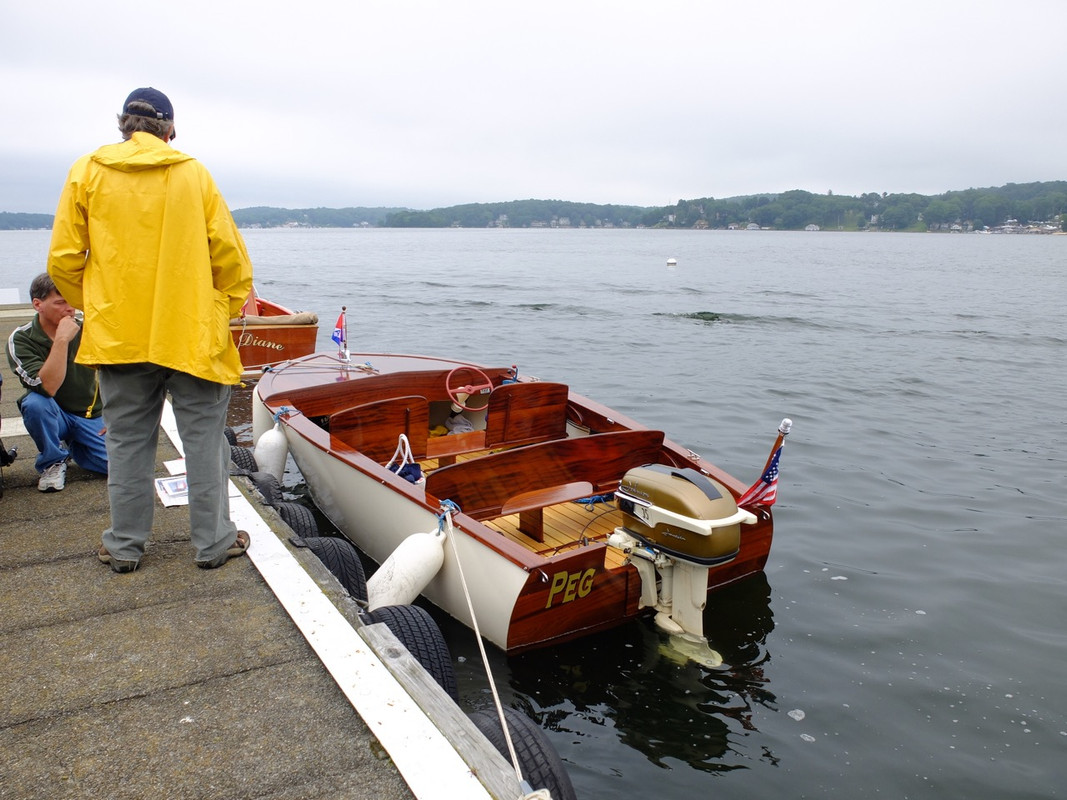 I lost out to a fabulous 1958 Century Roan in (original color!!) Pink. Super cool boat, in amazing condition....worthy of top honors! The owner offered to buy my '57 Johnson Golden Javelin, but for now, that engine is staying on my boat. It's just too cool to sell.... 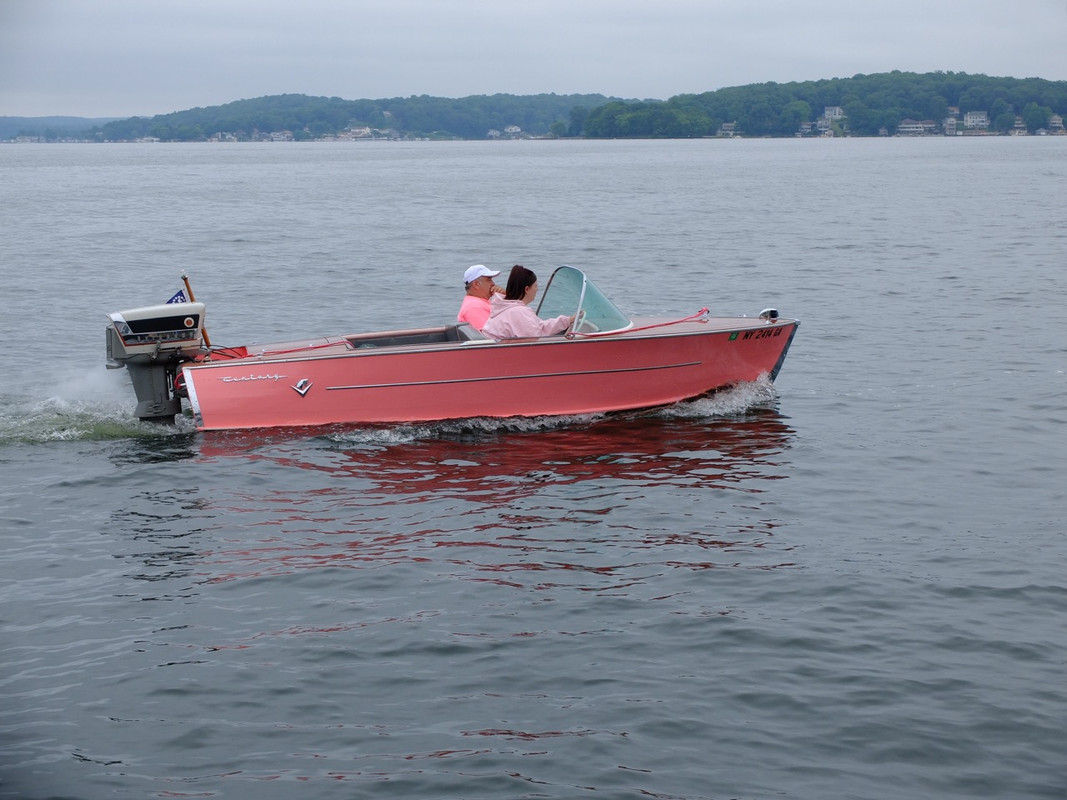 Leaving the show, we pushed off the dock, and.......nothing! No propulsion. 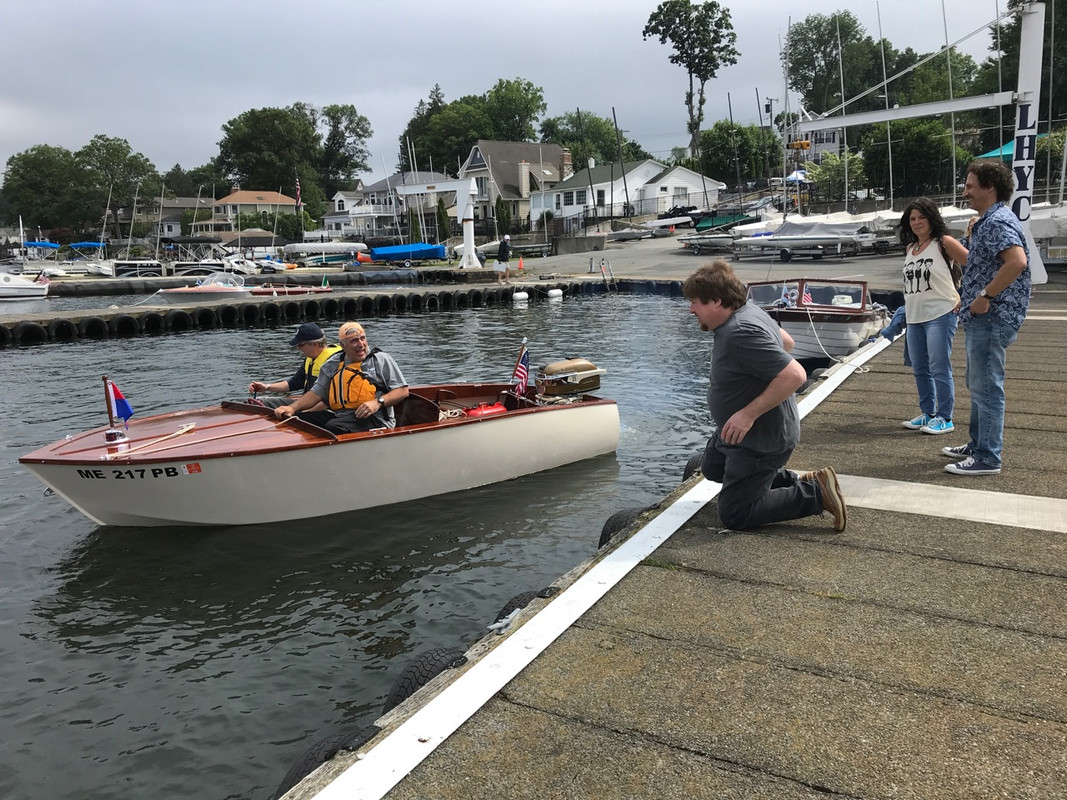 The shift connector decided at that moment to come undone. Better here than in the middle of the lake, I guess.

Toolbag was on board, so it was a 5 minute repair...

When boating with an antique engine, always bring your tools. Always. 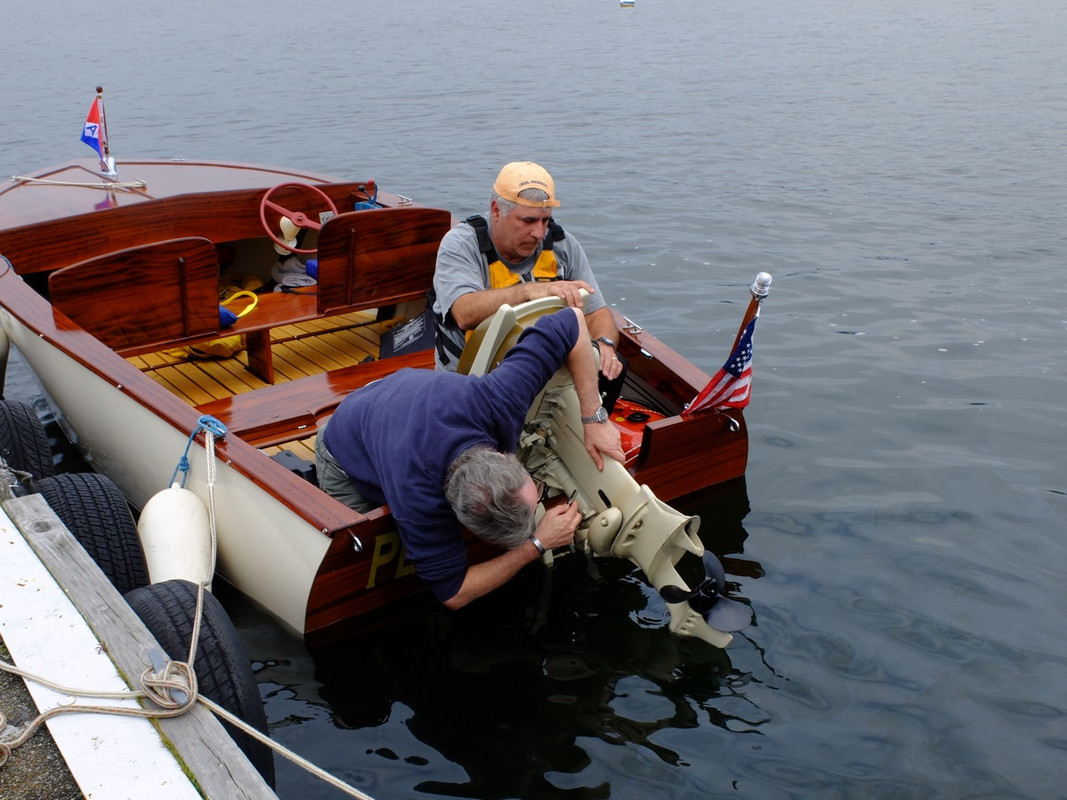 And we were once again underway. 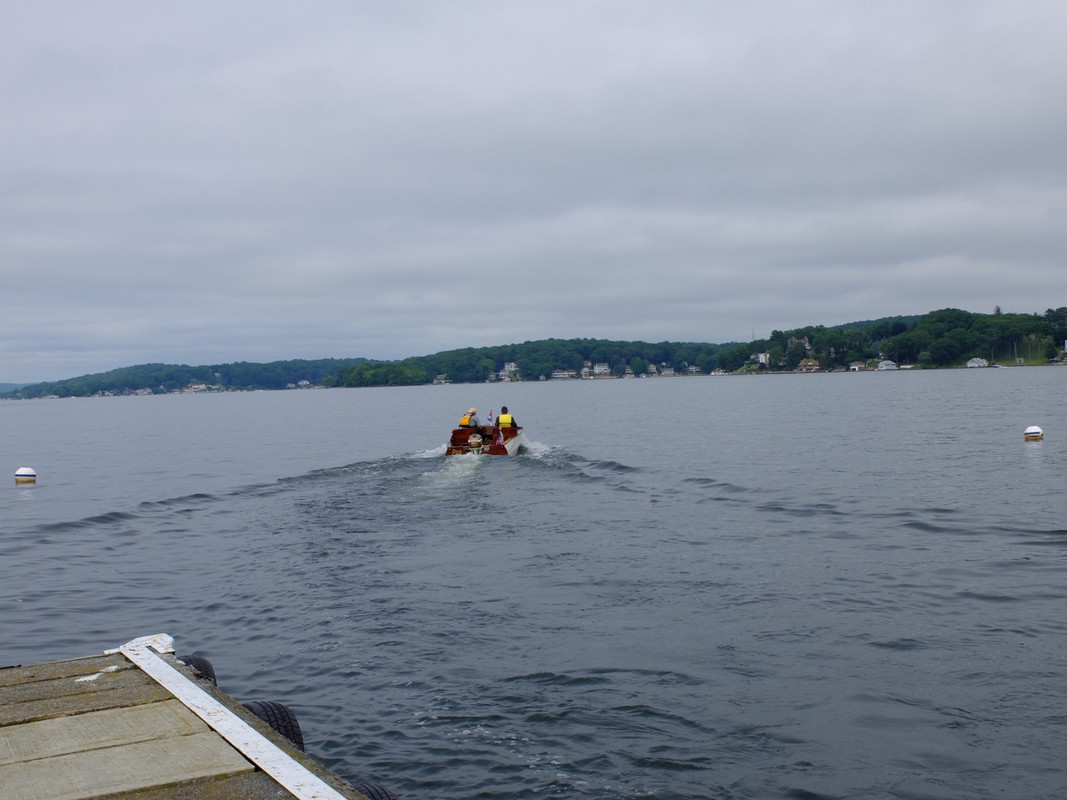 That's awesome Mark! Great validation of all your hard work and talent. Enjoy!
Murphy's Law: Anything that can go wrong, will go wrong.
Griffin's Law: Murphy was an optimist.
Top

Congrats Mark. You deserve it. It was good to talk with you. Wish I had more time to spend there. That pink boat was pretty cool
Bryan

Congratulations on getting the 2nd place. In my opinion, it should have been 1st. Skip
Built the Glen-L Monaco, 2016.
Top

Being handed a plaque by the club president was surreal! 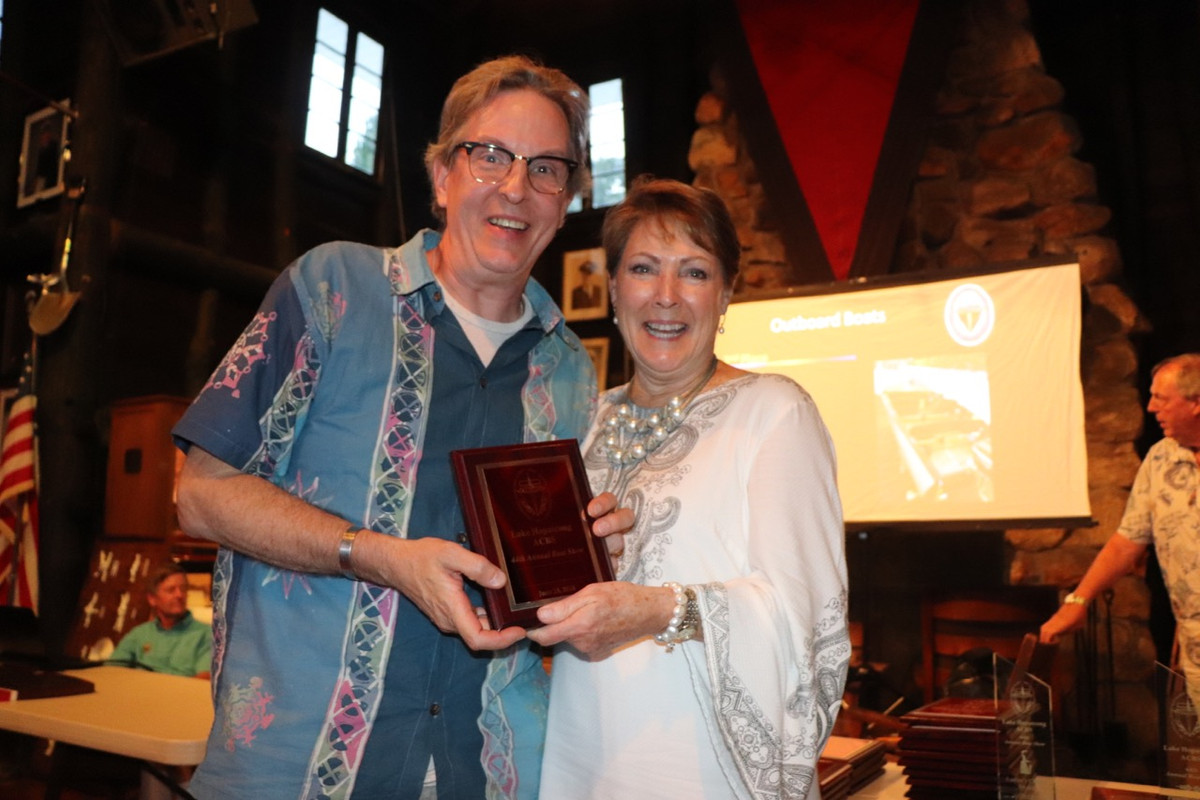 These were the "official pics" that the show took.... 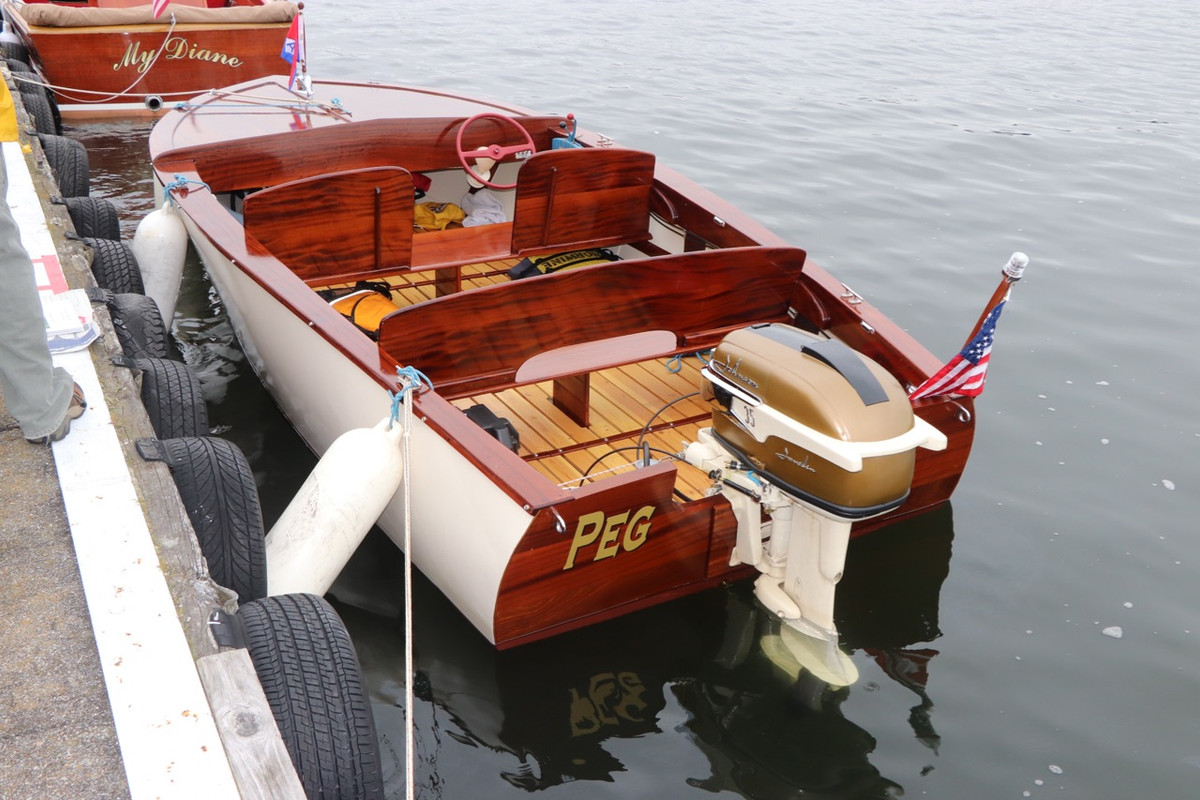 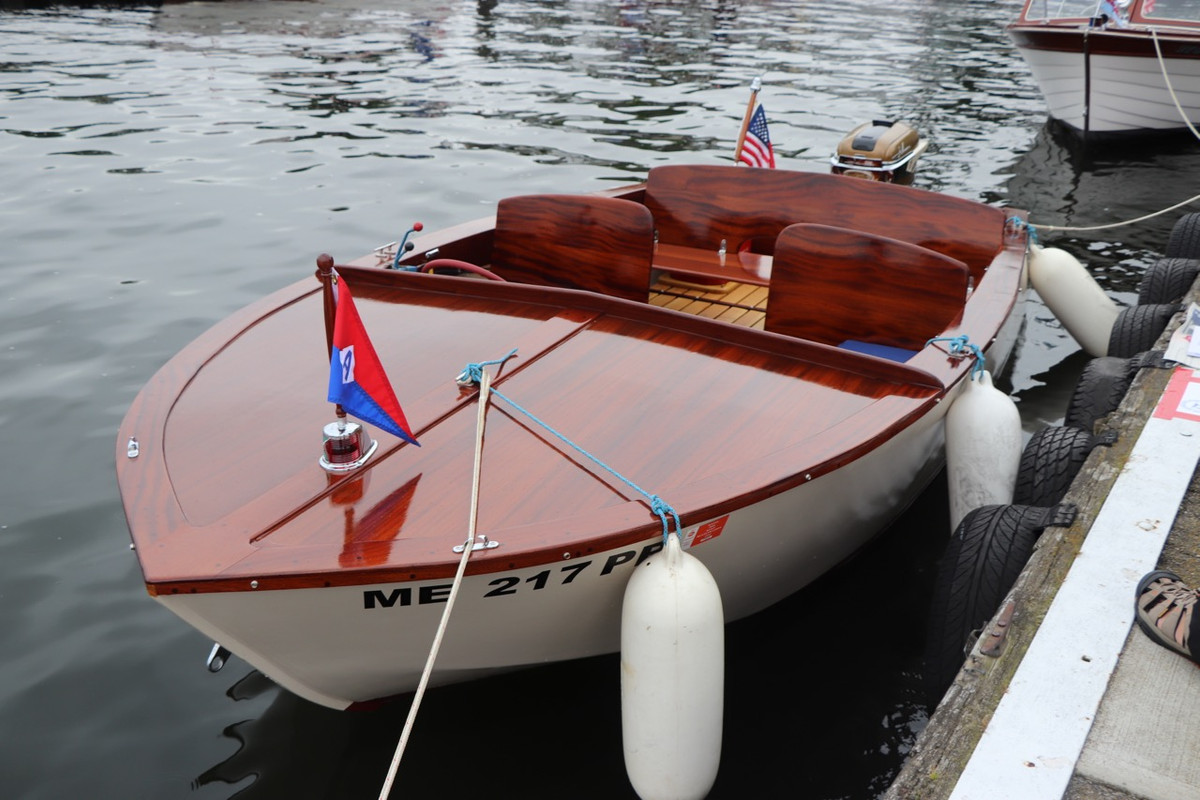 And a wonderful dinner! See all those big pictures on the wall in the background? Those are large portraits of the past yacht club commodores going back to the club's inception.... 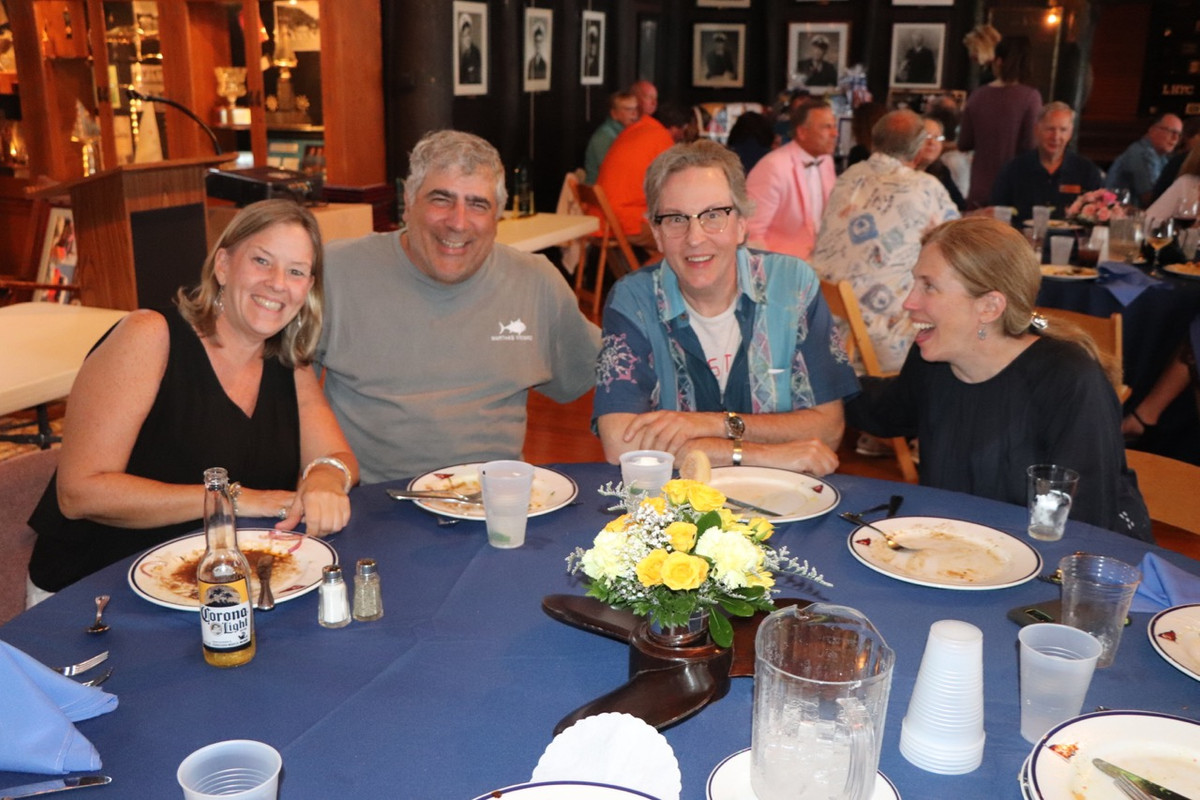 That's my uncle! He's passed on now, but is still held in extremely high esteem. When the club people discovered we were related, we were really welcomed with open arms! Not bad for a couple of non-members! This is me & my sister.....and "Uncle Bud". 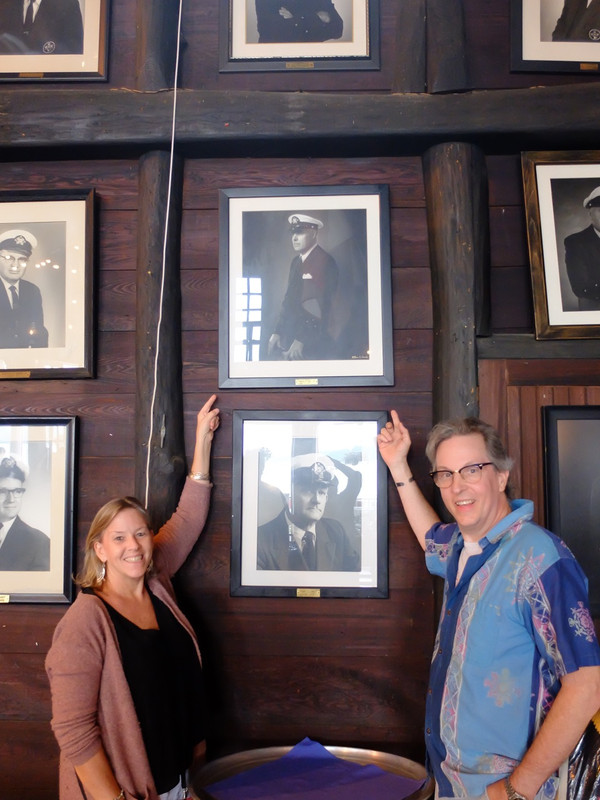 (on the other hand, isn't 2nd place "leader of the losers"?

By no way "Leader of the losers!" We're all proud of your recognition! Great Job!

I'm good with being vicariously happy with someone who's hard work and achievement is publicly recognized. Thanks for sharing.

For most builders, building a boat takes a lot of lonely hours working away trying to perfect every little detail, most of what will never even be noticed by the casual observer. When you're finally able to bring your finished creation out and see the joy it brings to everyone who sees it, it's a prideful moment. That's something that us on this forum understand and so it's a great place where you can share your victories.

By the way, 2nd place is for winners. And honestly, 10th and 20th place are too. Everyone who commits to building a boat and does what it takes to complete a functional boat is a winner. I'd be willing to wager if statistics were kept on the number of people who started building a boat and actually finished, the number would be 10% at the very highest.
Top

Thank you for sharing your story and the great pics! Congratulations on your award! That's a really beautiful boat.
"How long does it take to build a boat? Until it's finished" — yours truly
Why did the boatbuilder get a divorce? Because he didn't have enough clamps to hold his marriage together!
Top

I'd be willing to wager if statistics were kept on the number of people who started building a boat and actually finished, the number would be 10% at the very highest.

I have to admit: there were a few moments during the framing process where I thought "the fire pit is right over there..."

Glad I didn't succumb to those notions!