Hello, everyone. I wanted to let you know I have, after 14 months of "research" (including plenty of daydreaming), five months of forum membership, and six weeks of prep work, I have finally started my Mist Miss build. Feels great so far (2 days!) to see actual "boat pieces" on my own workbench, and not everyone else's great builds on the forum.

Some background on prep work to catch everyone up: 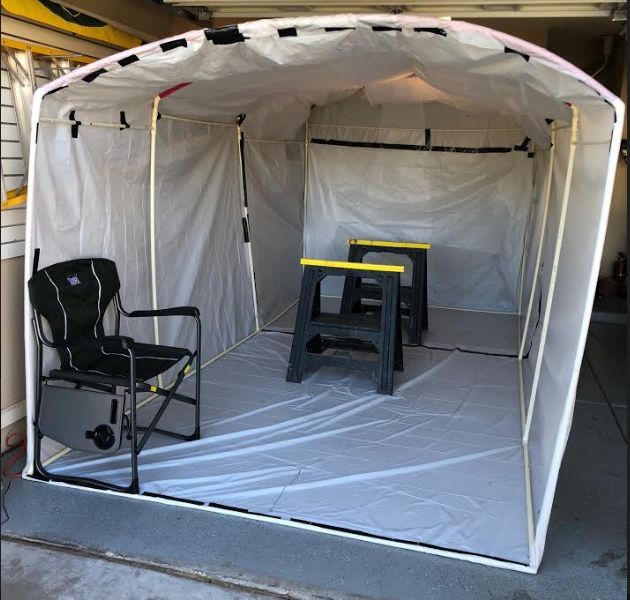 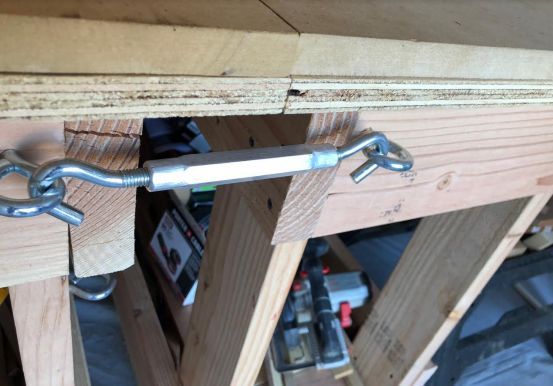 Finally, this weekend I was able to start the build, which included the plans transfer. I had read quite a few threads on the optimal methods, but the included directions approach actually did me fairly well. I had gotten a 4x8 sheet of carbon paper on Amazon, and even though I winced a bit when cutting the view holes into the plans, the approach worked well. I was able to use one board (roughly 8" wide x 8' in length) for 2 bottom frame members and 2 side frame members without much waste, and then a whole narrower (6") plank for the arched deck beams. I was able to complete frame 4 Saturday and frame 3 Sunday. 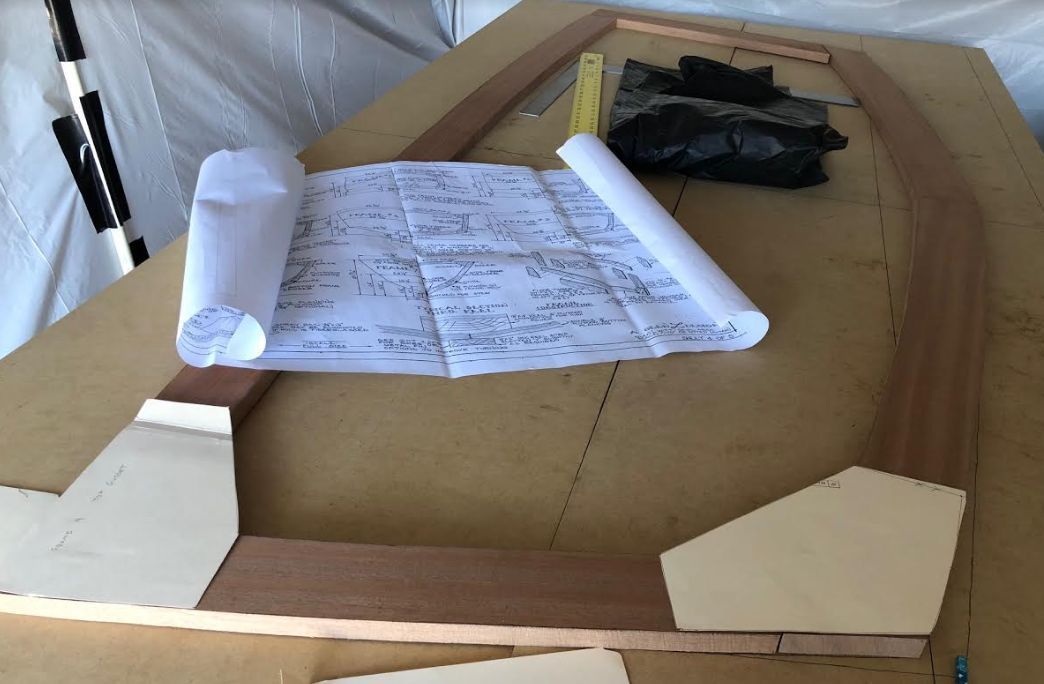 I had envisioned completing a full frame (mahogany, gussets, epoxy, fasteners) all at once, and then moving on to the next frame, but logistically that isn't going to work out, mostly due to available workspace. I essentially only have one vehicle spot (plus some spillover into the driveway itself). The next few workdays are going to be "frame member days", with plenty of bandsaw work. Then and only then can I move things around and bring in plywood for "gusset day" (with maybe breasthook and stem), and then maybe a combined "fastner/epoxy" session.

At least I was able to make cardboard templates of the frame 3 and 4 gussets. Also, I have ordered a combination disc/belt sander, which should be here before next weekend. I tried my finishing sanders (orbital and an old palm sander) to remove enough material to get up to my traced lines, but they just aren't able to remove enough material - it would take forever. I'm hoping the belt sander will assist in that.

So now after being a whopping 11.5 hours into the project, I'm really looking forward to it. I'm not sure how much time during the week I'll have, but I'm hoping to have the seven frames, transom, and stem/breasthook fully completed by the Christmas holiday, when I can then start assembly to the stringers. Then it'll start looking like a boat!

The Glen-L Forum has been great with words of wisdom and encouragement already. I'm glad to make the transition from "lurker" to "builder", but I know it'll be a long journey (but worth it) to "skipper"!

Congrats on getting started Andrew. I remember how good it felt to me to get started as well. It's a great project to occupy your free time.

Interesting approach to the sanding. I'm surprised we haven't seen that idea before. I certainly could have used it. MY garage still has remnants of sanding dust from 4 years ago when I was doing the fairing. It would have been nice to confine it to a controlled area.

I like the bench idea as well. I just added casters to my workbench that I've had since 2006 and what a difference its made already. Making room to work is not the major chore it's always been.

It's funny how difficult it is to find the correct plywood. We have so many other things available to us in this country. I order mine from two main sources. Houston Hardwoods (which I drove to ) and World Panel (if I recall, in Ohio) and that was shipped.

Looking forward to seeing the progress as you move forward.
Carl

Sanding tent looks great and I like the benches. Great ideas for budding builders out there. I can't believe all the dust and wood shavings I've produce in the last few days rebuilding the hatch scoop on the Torpedo. Sawing, planning, sanding!! I thought I was done with the big messes.

Where is the other part of the C&C? (Chair and Cooler)

Glad you started. I also like the tent and bench ideas. Don't forget your respirator while sanding, especially in a confined space like that. I also have had some of my wood shipped to my house including all of my plywood (Hydrotek). Shipping costs aren't the greatest but it is important to use good marine grade quality. Sometimes you have to do what you have to do without local sources...

Good point, Lee. After a note from both Roberta and Carl (Mr. Intense) on Carl's Vera Cruise thread (viewtopic.php?f=2&t=16739&start=2880#p213817), I've ordered a stationary belt/disc sander (a WEN 6500), which should be here later this week. I am planning on having the garage door open for ventilation.

I did have a question on sanding of the frames: How smooth do the frames have to be? Both in general as well as on the internal edges? The sapele I purchased was S2S, and the bandsaw cut the rougher sides a bit smoother. I believe further sanding to the drawn edges (and then later fairing) will take care of the outer edges of the frame members sufficiently. But with regard to the internal edges of the frames, do they merely need to be sanded/smoothed for appearance and or comfort (no sharp edges)? Should I run them through the router table with a straight bit as a "low-fidelity joiner"?

And Bill, no cooler for the garage. I pop into the kitchen for a refill on a regular basis to let the family know I'm still alive out there.

acflynn wrote: ↑
Wed Nov 13, 2019 11:23 am
But with regard to the internal edges of the frames, do they merely need to be sanded/smoothed for appearance and or comfort (no sharp edges)? Should I run them through the router table with a straight bit as a "low-fidelity joiner"?

On my boat, those internal edges will eventually be covered with paneling so I would think simple sanding for splinter reduction would be sufficient. On other boats they are exposed so more dressing work might be desirable. But at least initially, I think a simple sanding will be fine.

Of course if you are going to encapsulate them now , then you might have to go over the edges again, if they are cleaned up further in the future.
Carl

Ditto on what Carl said about sanding the frames.

Speaking of belt sanders, I suggest adding some sort of custom shrouding so you can connect the belt sander to a dust collection system. When I built a TNT back in 2010/2011, I didn't have this and my belt sander was the biggest offender in regards to creating dust. This picture shows what I did to my belt sander before I started my Monaco build and it basically creates no dust. It would take more custom shroud work on a WEN 6500 but you might want to consider it.


do they merely need to be sanded/smoothed for appearance and or comfort (no sharp edges)?


Yup. Tom
In the home stretch on a Tahoe 23
Top

Stationary belt and disc sander is the no1 piece of equipment I wish I’d bought. That and a decent band saw. I went cheap and it was useless....

Great work on the tent and benches...
Top

I didn’t worry about the sides of my frames as they are covered. I used a solid 1” rough sawn mahogany.
I got all my ply through Johnson’s Workbench. The carry marine grade, AA, mahogany ply, in stock. They are just over an hour away from me and they delivered the whole shipment for $50 (of course I spent $1k in ply).
I have a rigid stationary belt sander and a bandsaw, which were a god send. I have a vacuum I used occasionally, but it just got in my way most of the time, but good for you to have a good vac system. One day I’ll get one. Lol
Tom P.

Well I got a grand total of zero hours on the boat in the past week. The weekend was filled with a youth soccer tournament and surrounding activities, so even though the new WEN 6500 sander arrived earlier than expected on Thursday, I still haven't found the time to unbox it.

I am planning another excursion to pick up more mahogany while it's still on sale out here. Sapele is 25% off through the end of the month at Woodworker's Source, so I hope to grab the remainder of the framing material, as well as (hopefully) finding some longer lengths for the keel, chines, sheers and battens. If I manage all of that, that should be all the Sapele I'll need until after the flip, and then the bright mahogany I'll consider the African/Sapele/Genuine mahogany choices then.

By the way, they put out a nice video on various Mahoganies: https://www.youtube.com/watch?v=AGQoAYwt-BA

Lee, that's quite the setup for dust collection. I'm not sure how permanent a solution I'll be creating, but your photos gave me something to consider, although I only have a ShopVac. Due to the warmer winters here (Phoenix) I contemplated just doing the sanding in the driveway and doing assembly in the garage. The "sanding tent" would then become more of a "clean room" for that.

Tom P (footer), I reached out to Johnson's, but the freight here would be $540 all the way out here, while Southern California suppliers are less expensive for both Hydrotek and for Okoume on a per-sheet basis. By the way, I grew up in West Michigan over by South Haven, so I chuckled when I saw your WMU Bronco on your band saw.

My previous shop lacked space for dust collection and the shop vac filter fouled frequently. The solution I used was a HEPA filter for the vac, a cyclone dust separator, and an extra length of vac hose. The extra hose allowed the vac to lives under one side of the table saw without getting in the way, the dust separator got most of the dust before it reached the filter, and the 0.5 micron filter got the rest of the dust. It is so effective I can't afford to change it now that I have more room to work.

During my lunch hour I managed to trace out both bottom members of Frames 1 and 2 on a single 4/4 x 11" wide board. I was pretty happy with that savings - each of the frames max out at 5.25", so I can definitely get both out of one plank even while leaving it proud.

I also unpacked the WEN Belt/Disc sander and got that assembled and ready to use. Unfortunately, Lee was right. There really isn't any sawdust exhaust port on this thing, unlike the other power devices(band saw, table saw, router table). I was going to wheel it outside to test, but we had a front blow through today, with a 20 degree drop in temperatures and steady rain for the past 10 hours or so. Phoenix really needed it - hasn't rained since September!

TomB, thanks for the insight. I'll take a look at upgrading the filters and further accessorizing the shop vac.
Slowly building a Mist Miss in the Arizona desert
Top
Post Reply
139 posts