Frames 1 and 2 are completed (for now - not encapsulating yet and not yet notching for battens) and I'm working on the transom. Which brings me to a question on battens:

Since I have to cut the notches for the battens on the floor timbers of the transom, should I consider doing one or two battens on the side? (They are not in the plans for the Mist Miss). I'm looking for a stronger craft - is there an advantage to doing so, or will that lead to weakness in the sides of the frames? Any other pros/cons?

Hoping to have the transom completed this weekend - in and around 3 youth soccer games and I heard there's a football game on Sunday.
Slowly building a Mist Miss in the Arizona desert
Top

These boats a plenty strong!

A quick update after a productive weekend. Aside from encapsulation, I've completed the transom (still curing), and Frames 1 and 2. I tackled them in that order, as they are the three frames that are solid across the bottom. Frame 3-7 all have a two-piece bottom member joined with the plywood floor gusset. 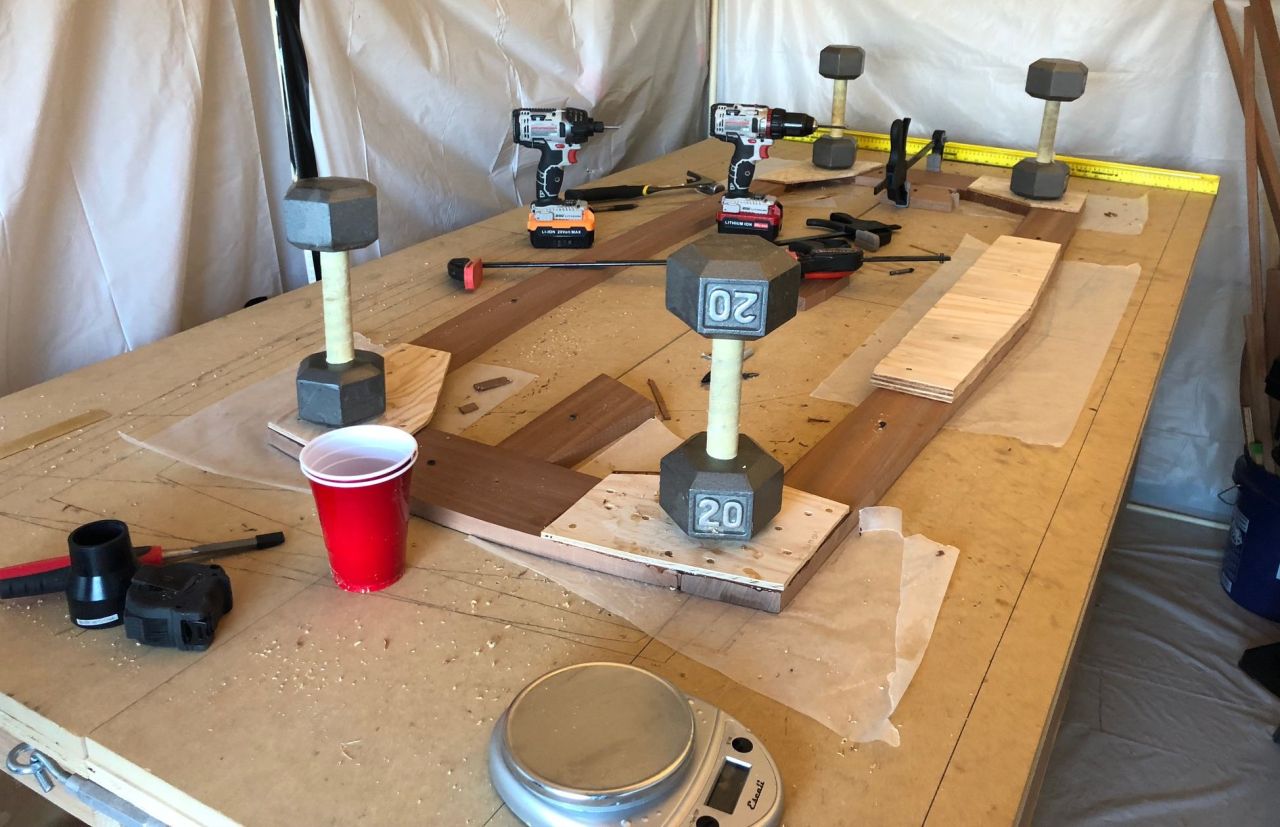 Carl suggested putting weights on while curing - I don't think it can hurt!

Frame 1 - There's some ground-in sawdust from filling holes used screwing the frame to the layout board I need to remove prior to encapsulation. 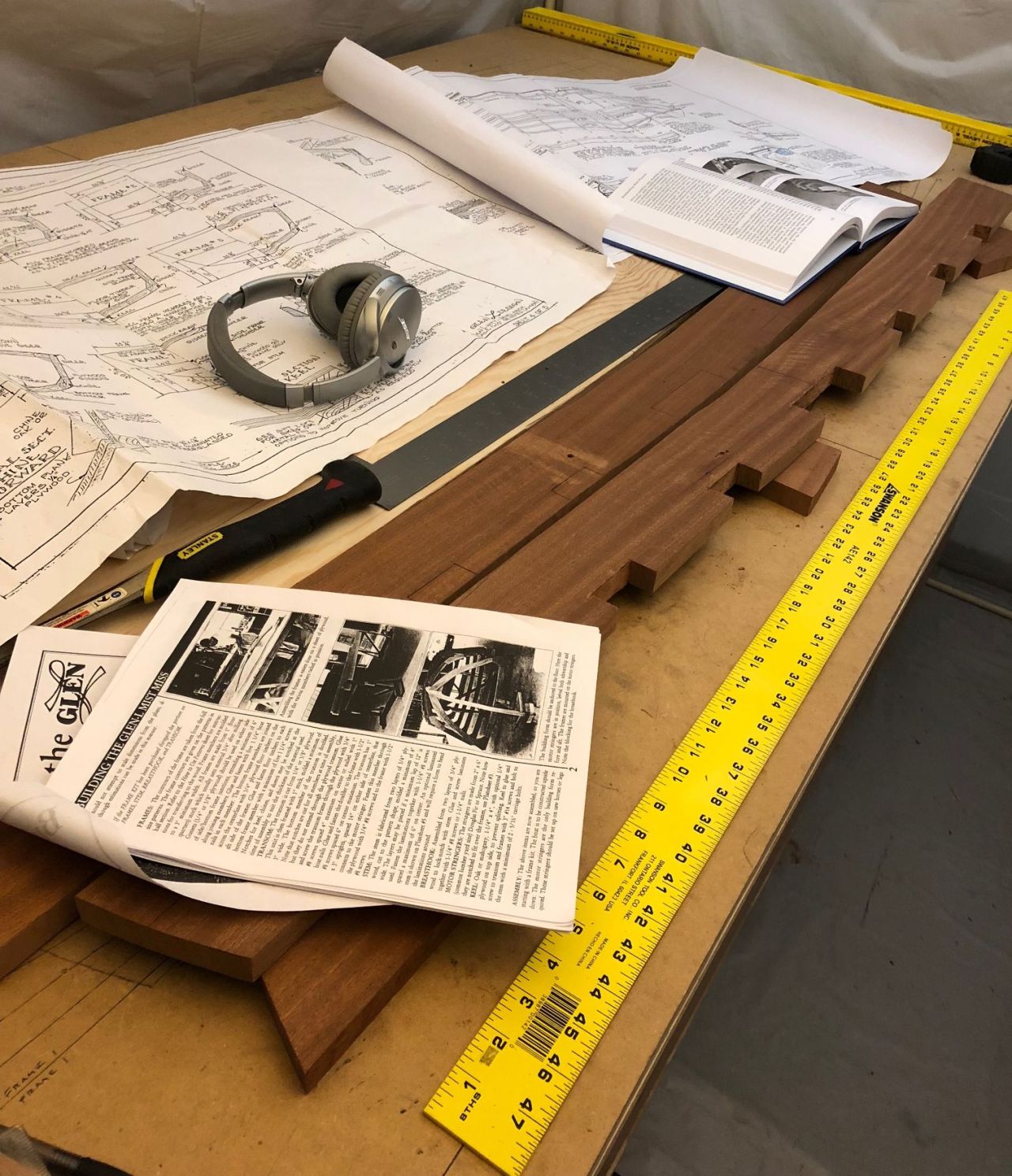 I had to break out both the textbook and the instructions to determine that the keel and battens don't go through the second bottom member on this design.

I'm pretty pleased with the following: 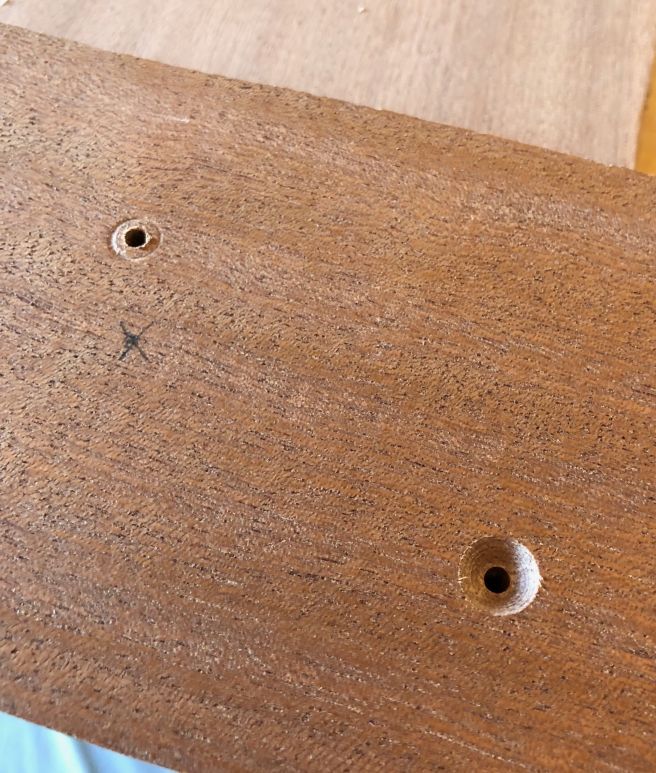 First pre-drill (upper left - the circle is from the chuck, which is also my depth gauge), then countersink (lower right). 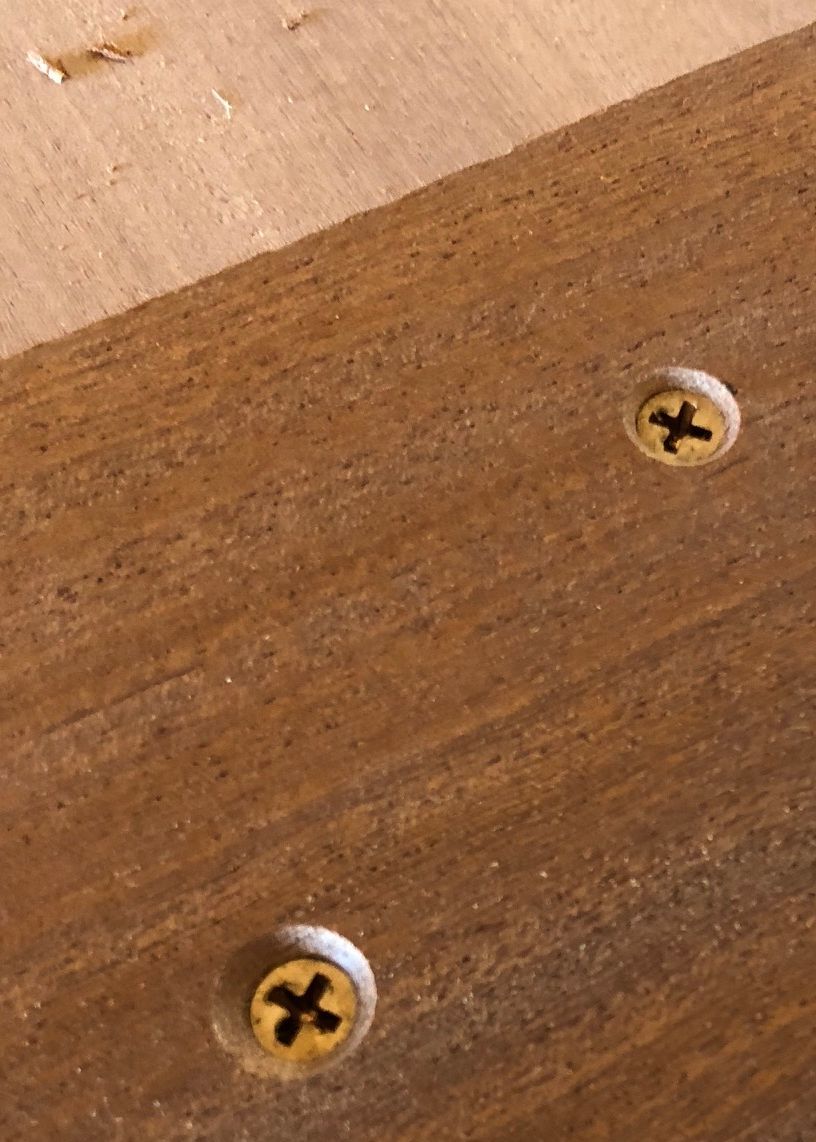 You can see that the Silicon-Bronze screw heads show a little warpage from the Frearson driver, but are sunk really well. 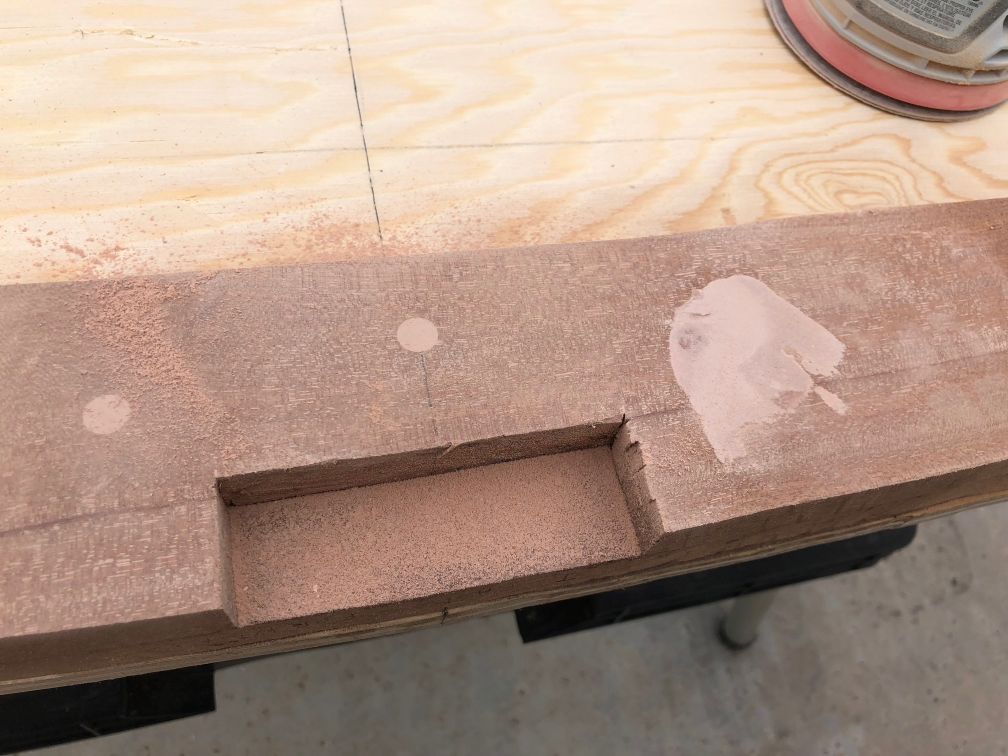 All praise Famowood! I'll be using this on frames and internal construction, will try out bungs on exposed areas

Things that aren't so great: 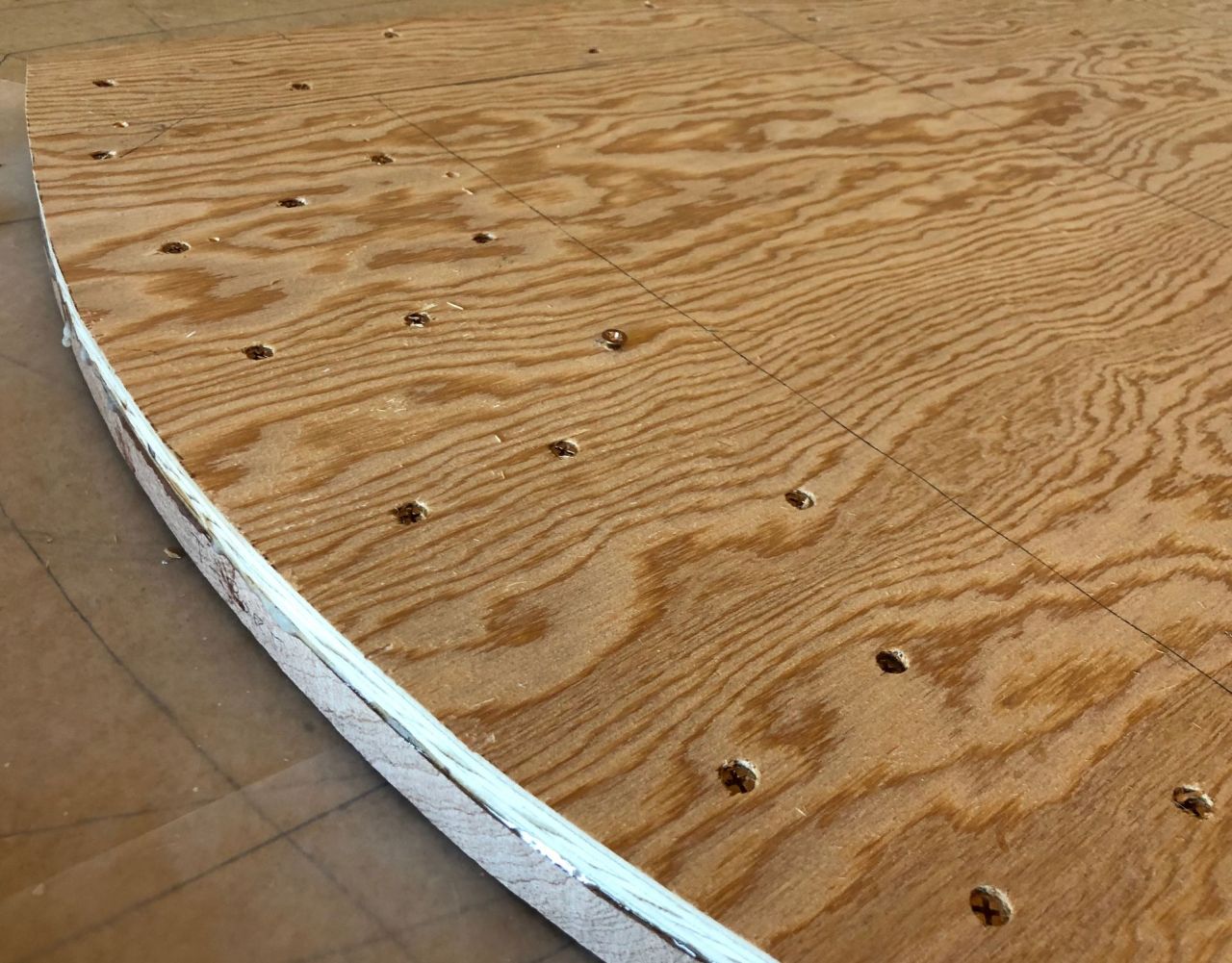 Two out of sixty ended up with stripped heads 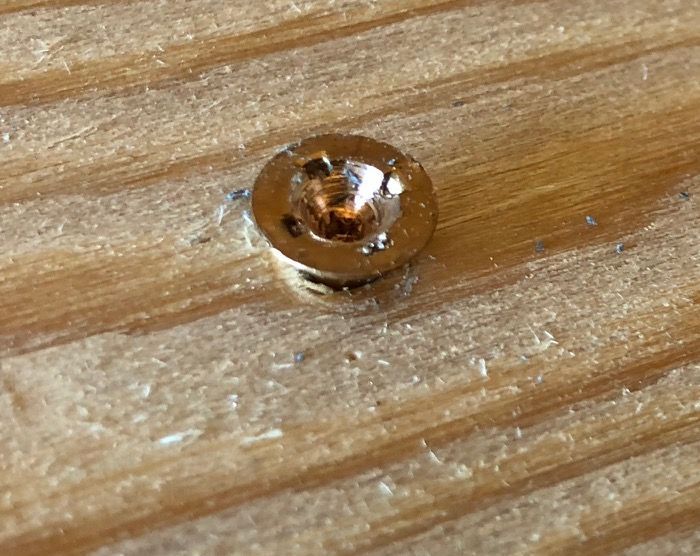 Fortunately they're also soft enough to use the oscillating multi-tool and shear them off flush
So a question: What's the best approach to removing the ground-in sawdust in the mahogany post-sanding? You can see some in the photos above. I'm guessing that shouldn't be in there before encapsulation. Traditionally I've heard cheese-cloth, and also heard rubbing alcohol. Ideas?
Slowly building a Mist Miss in the Arizona desert
Top

We have all had the same problem with the silicone bronze screw heads stripping out. I have sort of learned how to deal with the problem somewhat, but I am going to order and try a Frearson driver bit that Glen-L sells. It is supposed to be the bit of choice for these screws. Maybe others who have used this will chime in here... Neel
Top

Dust and resin removal - Wood resin is released while working the wood and can interfere with the epoxy bond. I vacuum thoroughly and then wipe everything down with alcohol. The alcohol dissolves the resin and maybe just spreads it around but I see color on the rag so something is getting picked up.

Stripped screw heads - get some steel screws for the prep and only put the SB screws in once at the end. Get bits that match the head size and shape and then give the driver a tap to be sure it is seated. Switch to square drive, they don't strip out...the screw head twists off instead.

For big screws, stick with the Frearson heads.

I’m no pro, I’ve only built one Malahini, but here’s my take.
I used Phillips bits most of my build. I think they are more forgiving if your not straight on. I also used steel screws where I may need to fit and refit, then finish up with Silicon Bronze.
You choose how much time you spend on cosmetics for things you will never see again (not one of my frames show, so only I know how Purdy they aren’t).
I’ve found hi pressure air works best for getting sawdust out of grooves and grain. You can also vacuum. The nice thing is, what may be left, finishes the same color as the wood you sanded it off from.
Don’t try to overbuild it. These boats were designed by a marine engineer with over 50 years of proven success. Making it rigid where it’s supposed to flex, may be its demise.
Happy building.

Get a toilet bowl wax gasket. Use it to lubricate the screws. You can put the days worth of screws in it at one time.

In my view, Bill is on the money. I have a graveyard of stripped screws, despite having a frearson bit for my driver...and driving the majority of screws in my build, by hand!

About a month ago, I bought a little block of beeswax. I use a work glove or a scrap of wood to roll the threads across the wax...and can now use my driver with confidence...provided I go slooooow until the screw head is below the top of the counter sink. I still occasionally strip one, especially when I'm not careful to get the driver bit straight, but the wax has been a life...er, screw saver.

Toilet ring is bigger and cheaper!

I've seen some folks melt beeswax or beeswax and mineral oil combo...and dip the screws, but that may be overkill.
Top

Wax definitely helps with driving screws. Toilet ring is a good answer. I use bees wax, but only because my hives provide it for free

A Frearson bit is a must if you have frearson head screws.
Bryan

I forgot to mention, I also use a Frearson bit.

@neel thompson: I also use the Frearson bit that came with the Glen-L hardware kit for the Mist Miss. It's the best of the ones I have. I was able to find some short Bosch ones, which are black (think drywall screw material), and a longer one which doesn't seem as well made. I'm not sure how long these will last, as normally I go through #2 Phillips-head bits quickly, but those are on generally harder screws.
Slowly building a Mist Miss in the Arizona desert
Top

Thanks for all the insights, everyone!

So you're saying wax, eh? I remember reading about that when I was doing research before my build. It's interesting how all of that "accumulated book knowledge" goes out the window once you start cutting in the shop. It's only then when you have to reapply those lessons into actual practice. Toilet ring is on my list for the next time I go out to Lowe's/Home Depot. Thanks also to @mickfly, Bill and Bryan for this suggestion, as I don't have ready access to beeswax.

Does no one use cheesecloth any more? (I guess it's generically called that, or "tack cloth". That's what my dad always recommended, but I never liked it much, as it seemed to get clogged too easily). 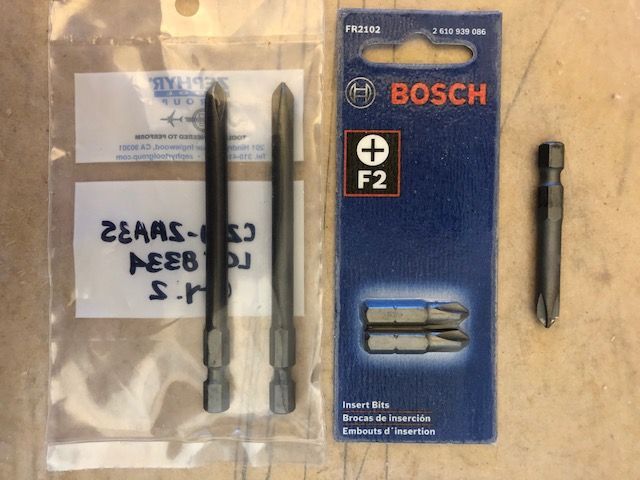 @Tom and Footer - The problem was that I WAS using steel screws first, and even they were getting stuck/stripped.

@Jimbob - In the Sapele, the drywall screws would (occasionally) snap at the head unless I used an over-sized pre-drill, and then the SB screws weren't really gripping. That and my arms were sore after 60 screws of hard downward pressure in the transom!

@denbrlr - Lee, here's the set I got on Amazon. The smallest one in the set is for #8 screws, and has worked well thus far. I may only be using that and the next size up. I basically use the same process you mention. 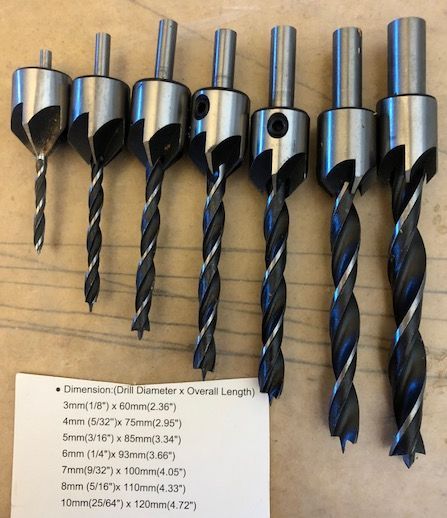