My husband John and I along with somewhere between 60 and 100 other folks attended the Annual Gathering of Glen-L Boatbuilders last weekend. This was the 10th get-together we've had and it was great fun as always. And, there were about 20 boats in attendance as well!

Let me tell you a bit about how this Gathering came about. Most of you know we have an active Boatbuilder Forum on our site. This is the place where Glen-L builders help each other and is really a community of super nice people. So, about 11 years ago, several folks started talking about having a get-together. I'm going from memory here, so forgive me if I leave anyone out. But, as I recall Bill Edmundson and Dave Grason got together and scouted out a place to hold an event.

They ended up choosing a great venue in Alabama on Lake Guntersville. All the plans were laid and the excitement began to build. Back then, my brother Barry was still at Glen-L and I told him and Glen that I thought Barry & I with our spouses should go to show our support. Well, neither of them thought that was a good idea and that we would just be interfering or something like that. So that was that, or so I thought...

A couple of weeks later, Barry comes into the office one morning and says, "Okay, Anke (his wife) wants to go to the Gathering". So, I looked at him with my best puzzled look and said, "what am I, chopped liver?" Bottom line is that Anke is a lot better at persuading Barry than I am! So, we made plans to attend and have gone to all but two events.

We only held the first two Gatherings in the Alabama location and moved it to Hales Bar Marina & Resort because it seems to be a more suitable location and we outgrew the Alabama venue. There are floating cabins attached to a dock, so everyone gets to be right there where all the action is. 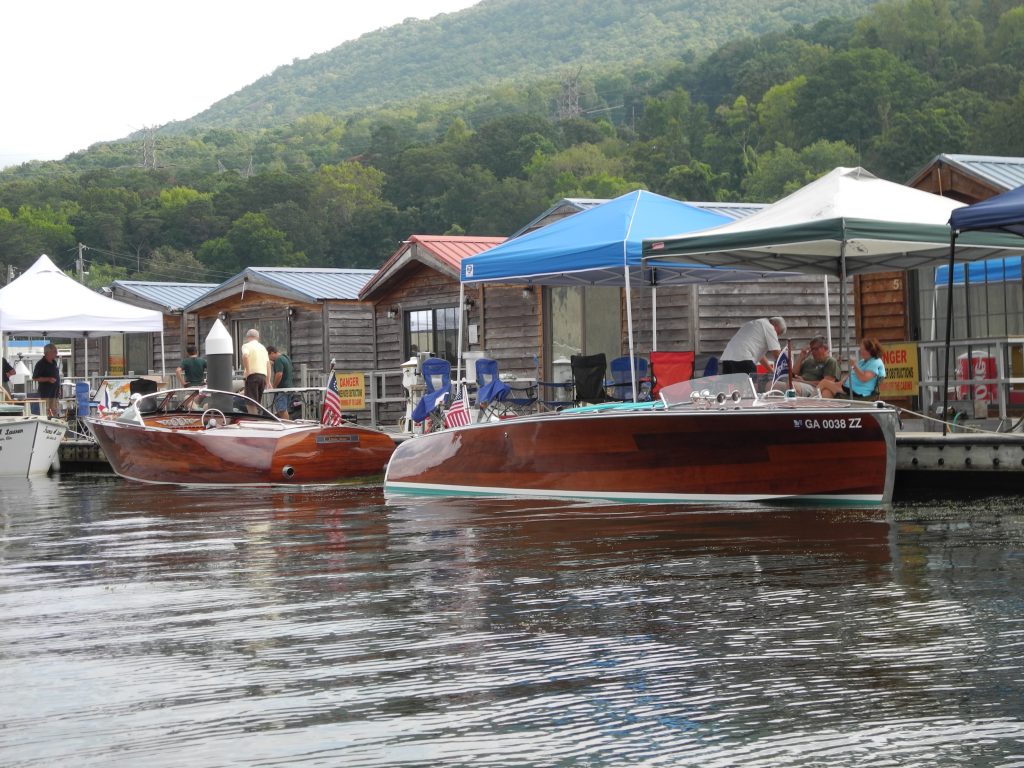 Okay, enough of the back story, now about last weekend. John & I arrived on Wednesday in Chattanooga and were able to spend some time with our friend Tom who recently moved to Alabama. The Gathering doesn't "officially" start until Friday, but I think that may be changing because people are coming earlier each year. On Thursday evening, Neel who built a Gentry and his friend Craig, had all of us early-arrivers over for a delicious Spaghetti feast. Yum! It was so nice to sit and talk with people we hadn't seen in a while and meet new ones. We had a great time. 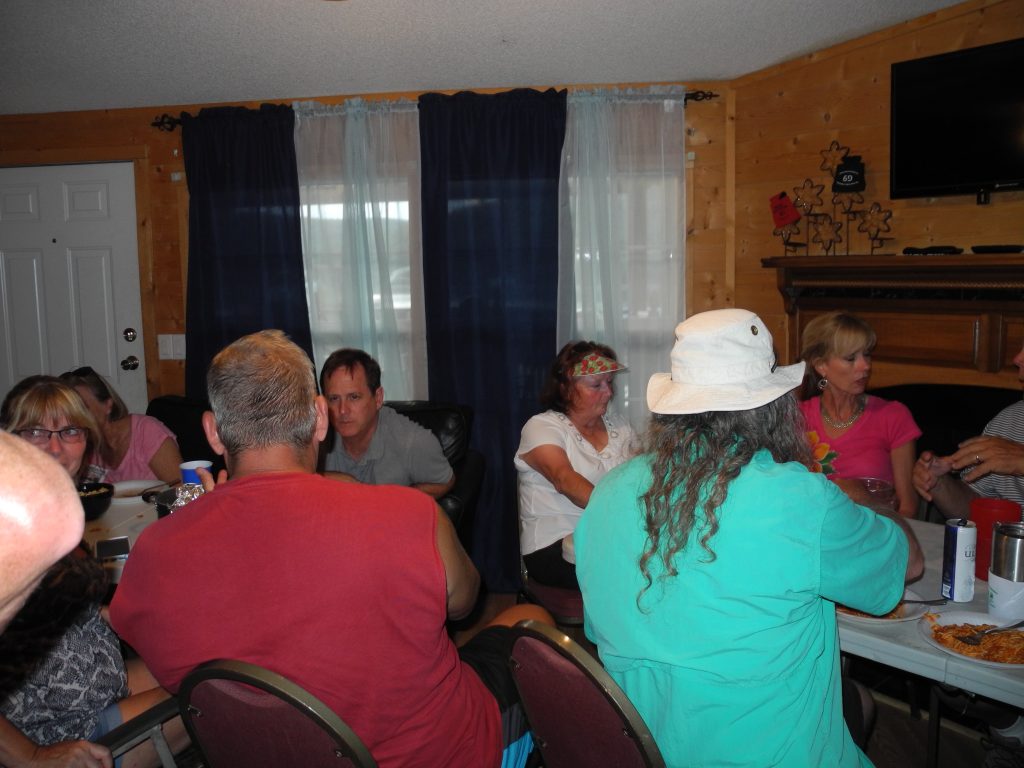 Friday morning we were met with delicious waffles by Bob Bradenstein, Malahini builder. 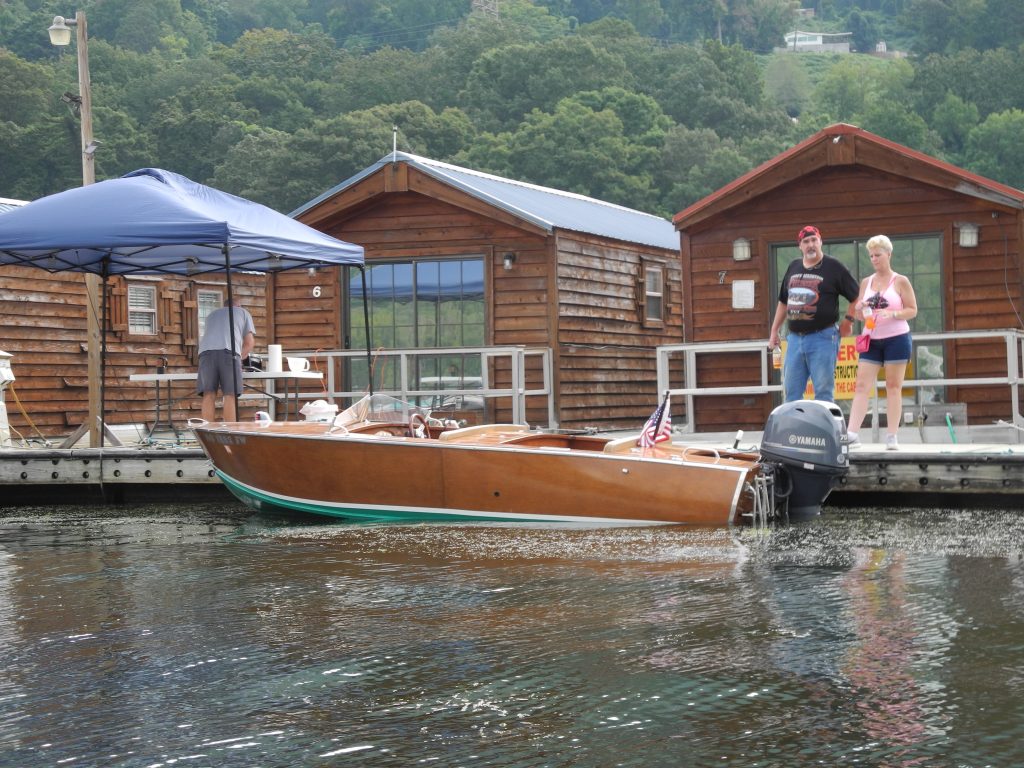 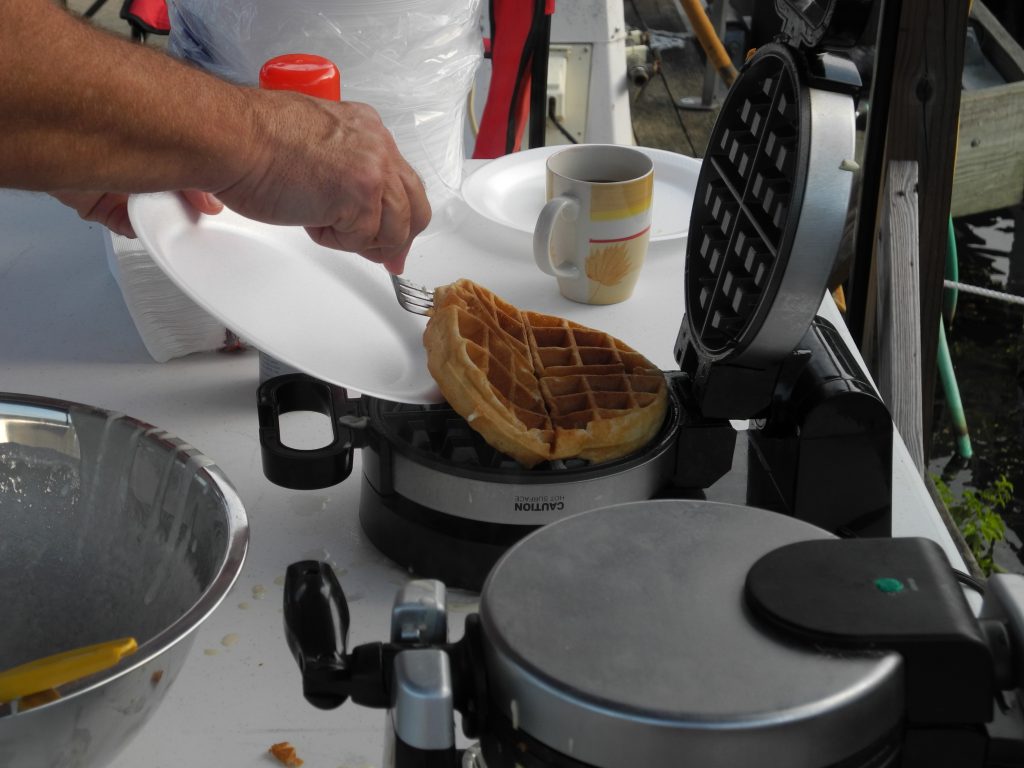 We oogled and ahhgled at all the beautiful boats... 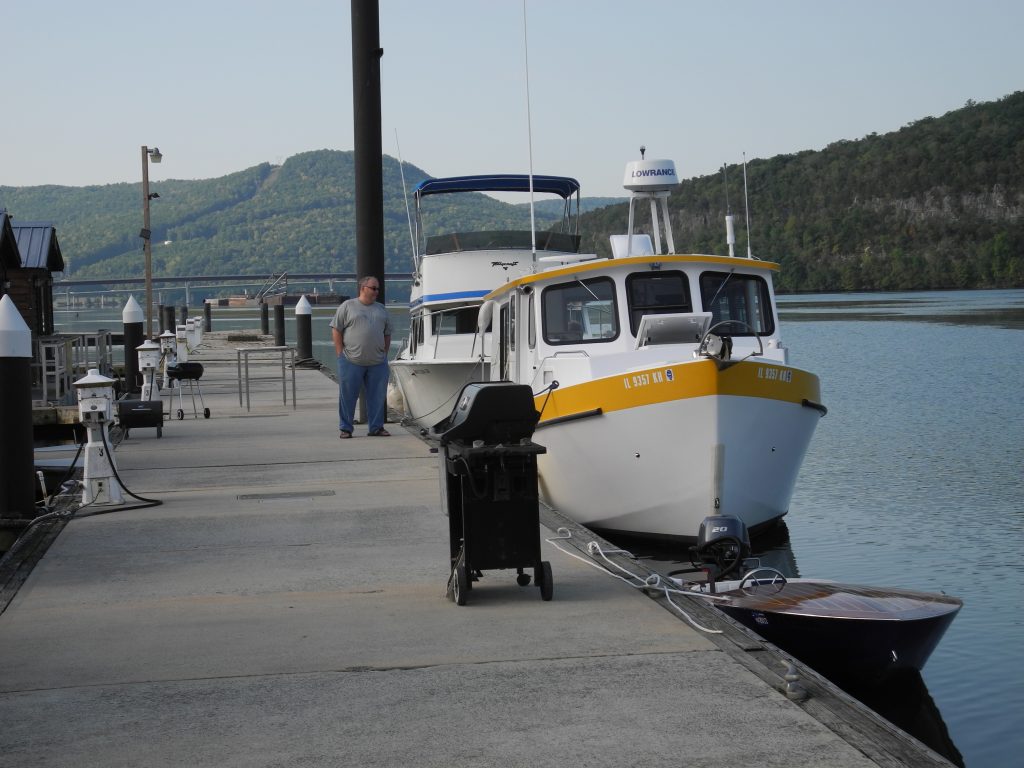 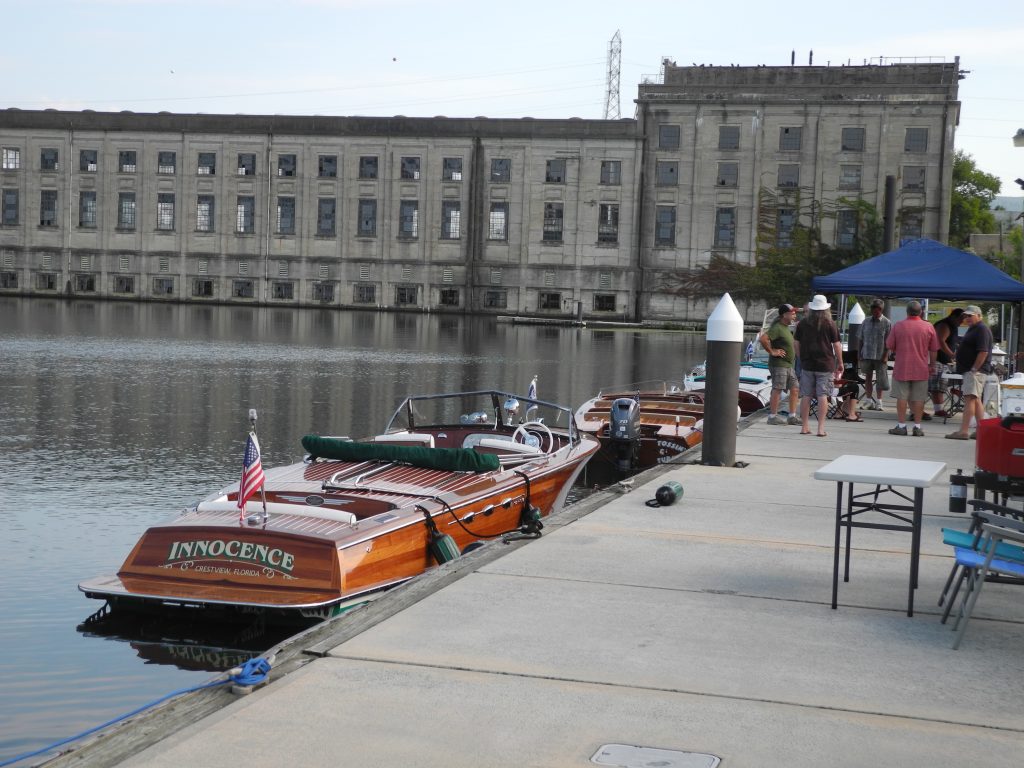 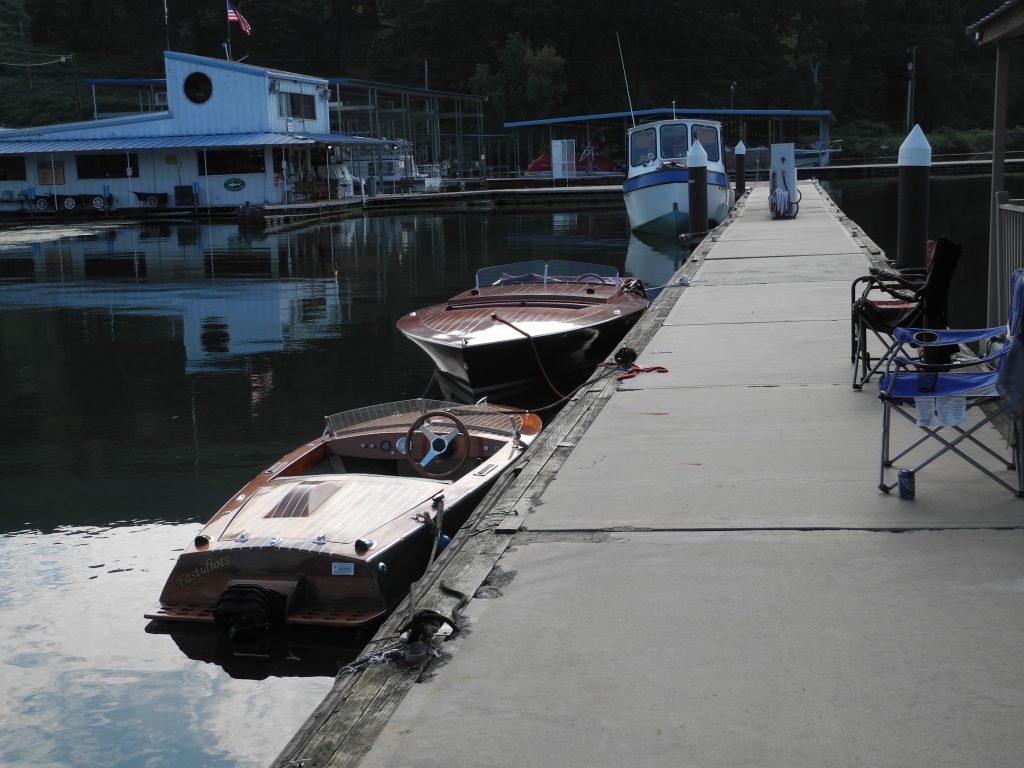 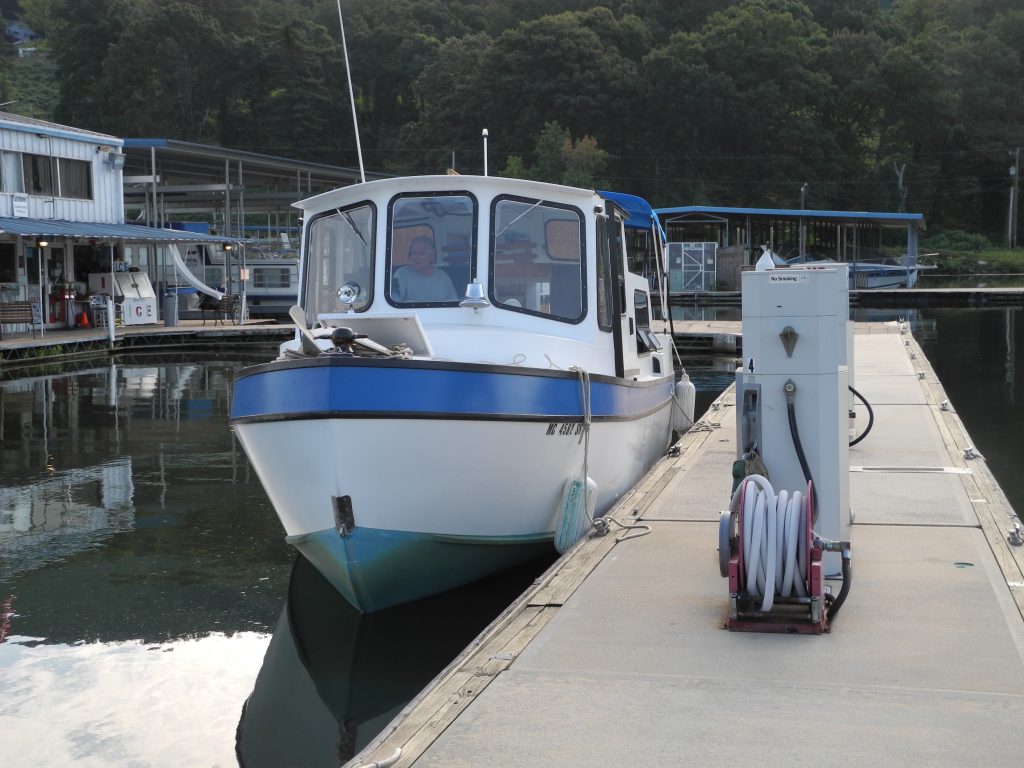 This Coastal Cruiser built by Harold Peterson stopped by to refuel--he didn't know about the Gathering!

Then at about 10:30 am, we all gathered into boats to make our cruise to Chattanooga for lunch. This has become such a fun excursion and seeing all those beautiful boats that were hand built, each a unique creation, in the water is breathtaking. 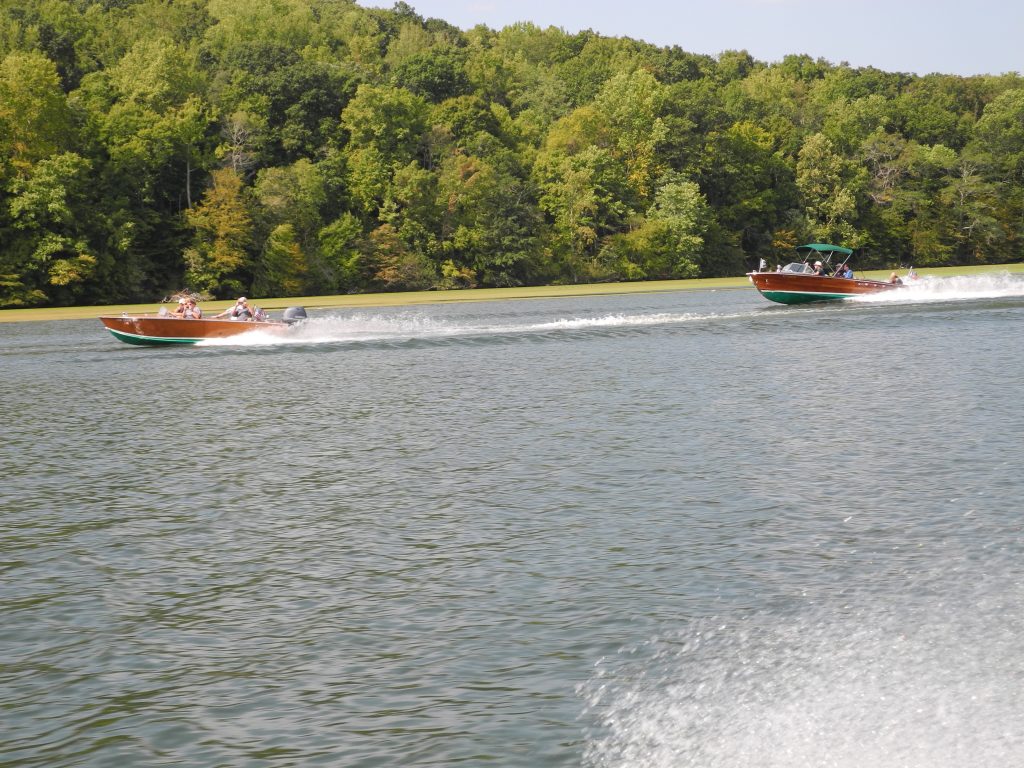 Malahini by Bob Bradenstein and Tahoe by Butch Barto 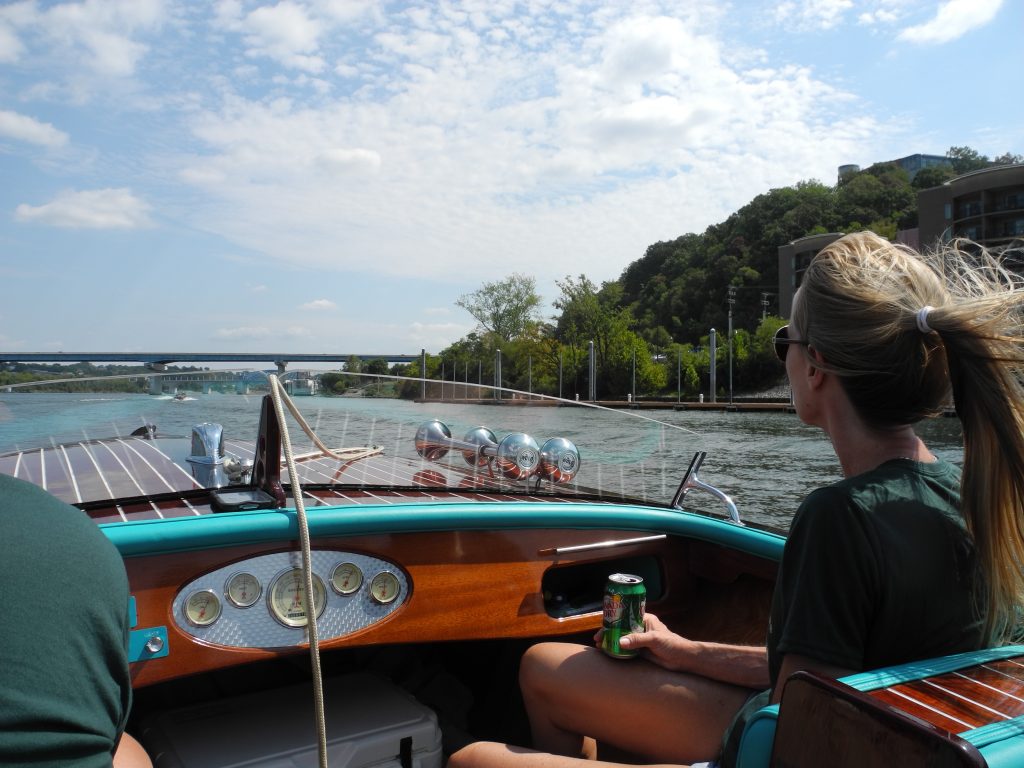 Over the bow of the Belle Isle by Jim Jatho

Torpedo by Roberta Hegy and Malahini by Bob Bradenstein 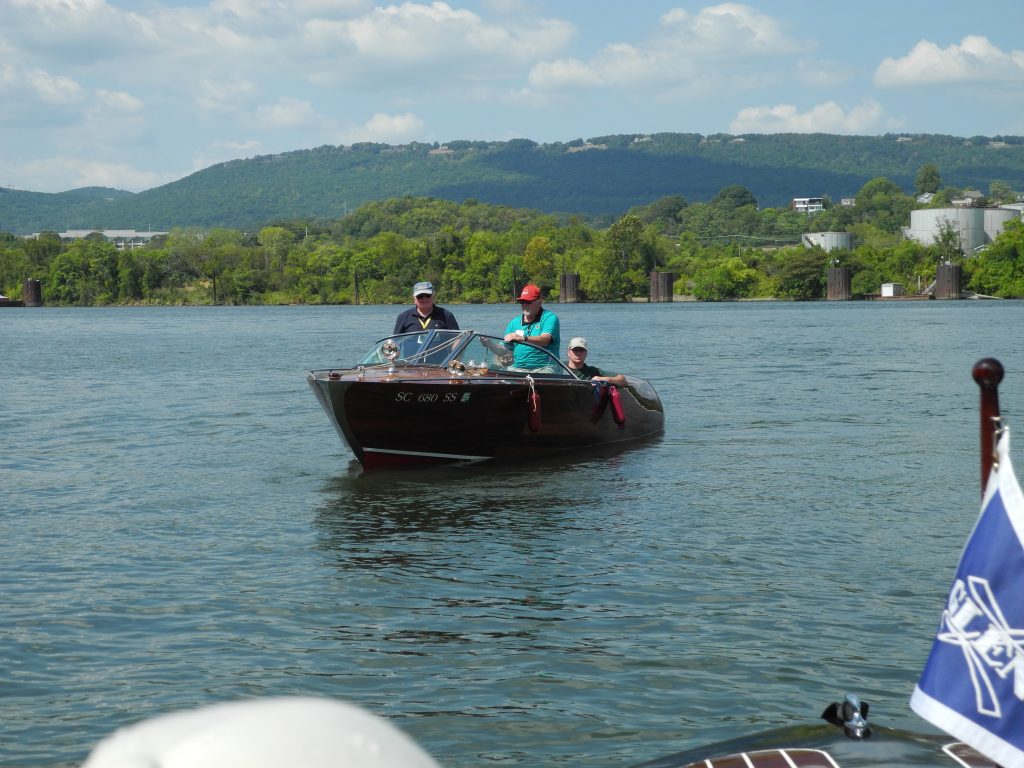 Hybrid Riviera by Bob Smith. He cut off his Century Arabian at the waterline and used the Riviera plans to build above. 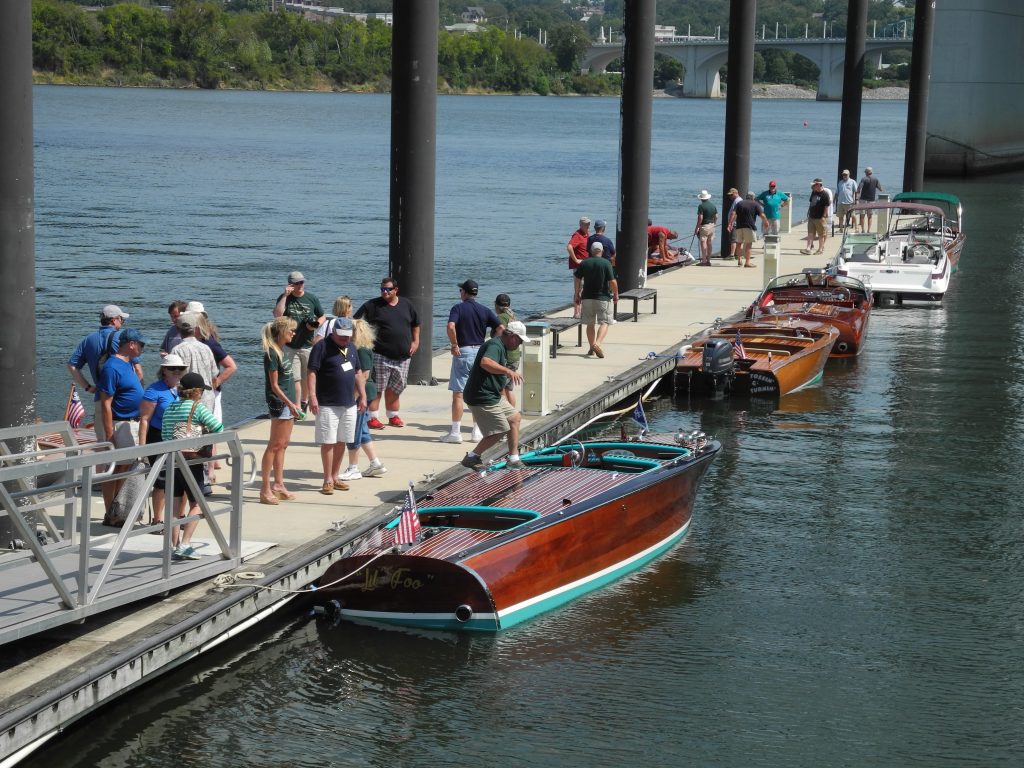 Our motley crew and boats at the dock in Chattanooga! 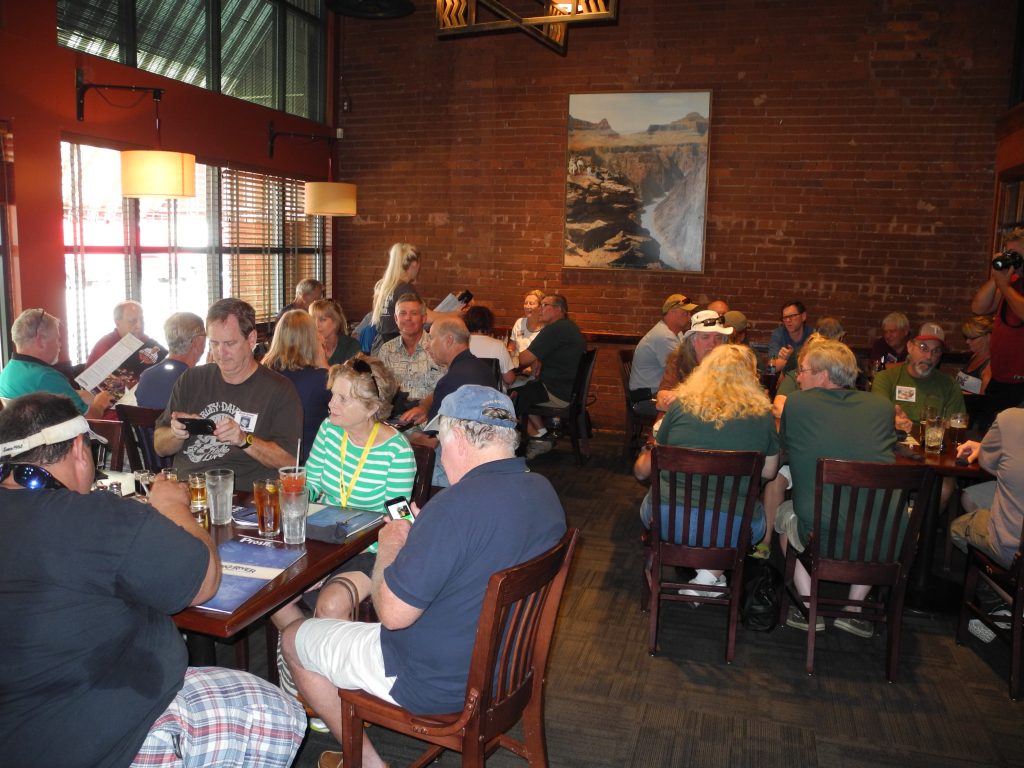 This is us! Good food, great friends and great conversation...

The trip each way to Chattanooga was about an hour or so. The weather was beautiful and the water was smooth--a great day for boating. Later that evening, many of our Forum members made wonderful food for all to enjoy and then there was music and fellowship on the docks for the rest of the night.

Saturday morning was once again yummy breakfast and then more boats! Some of the highlights for me were talking to Butch Barto, Tahoe builder. Butch has been to almost all of our Gatherings with "Innocence", his Tahoe 23 (maybe 24). This boat has won many awards at boat shows over the years. A couple of years back, a jet ski ran into the side of Innocence and she had to be repaired. And not too much later, she caught on fire in Butch's shop. Each rebuild/repair she looks better. This time, Butch decided to increase the size of the cockpits and he added a bunch of really cool hardware and other special touches. Butch's philosophy with this last re-do was no holds barred--he got what he wanted. 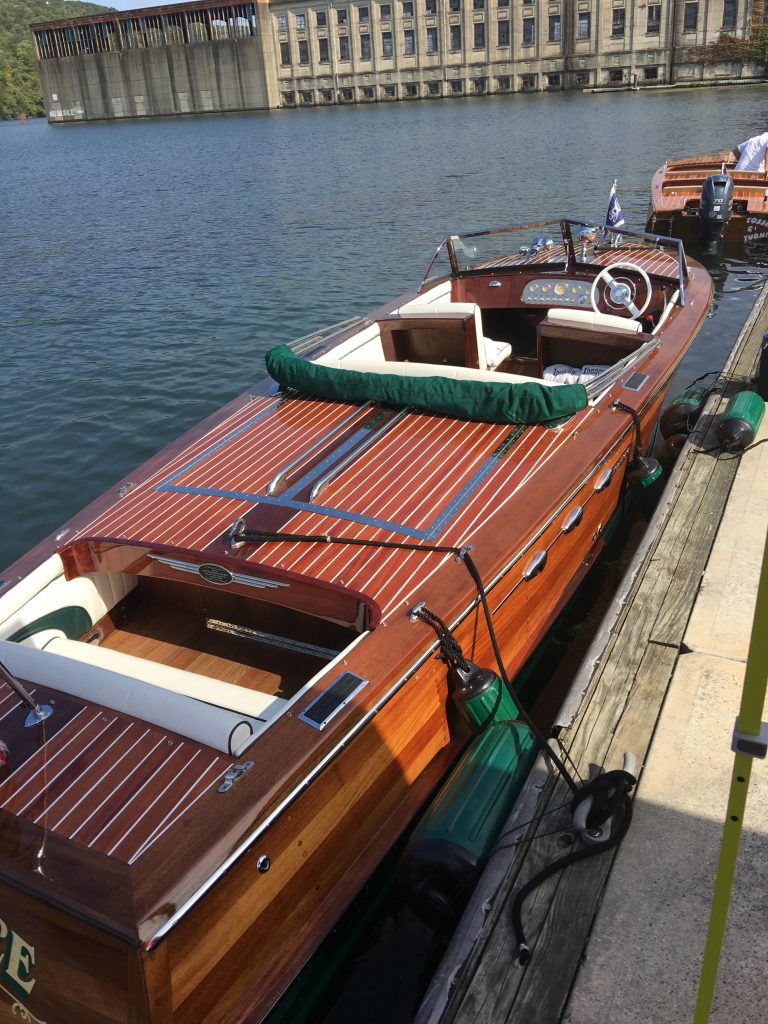 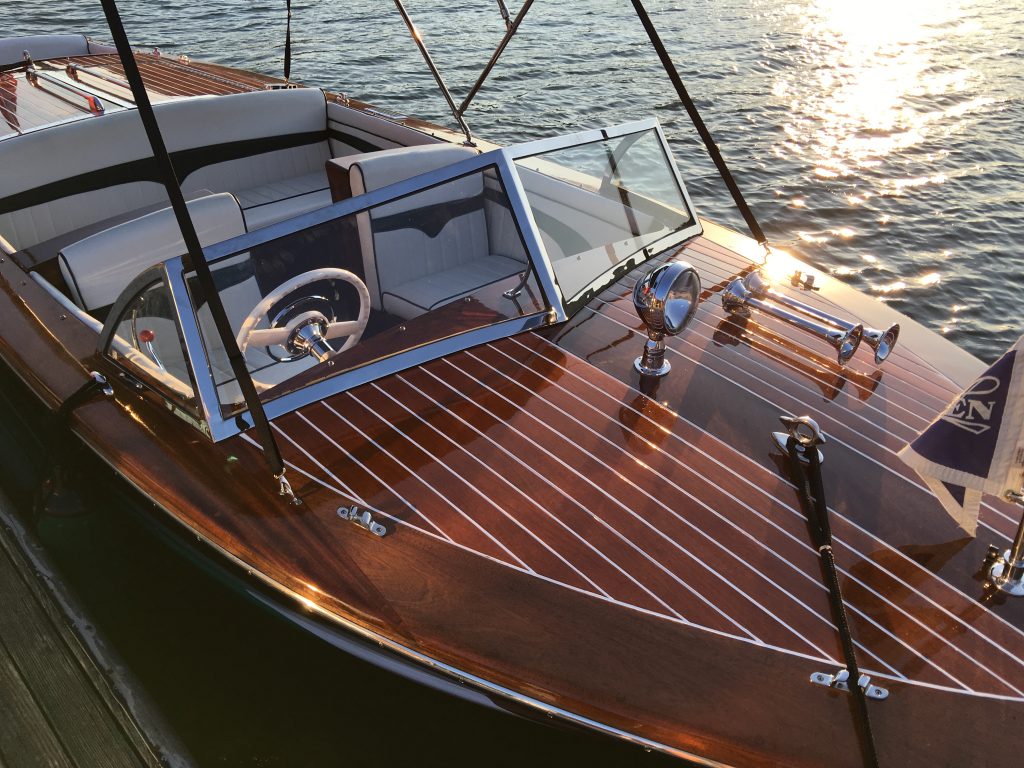 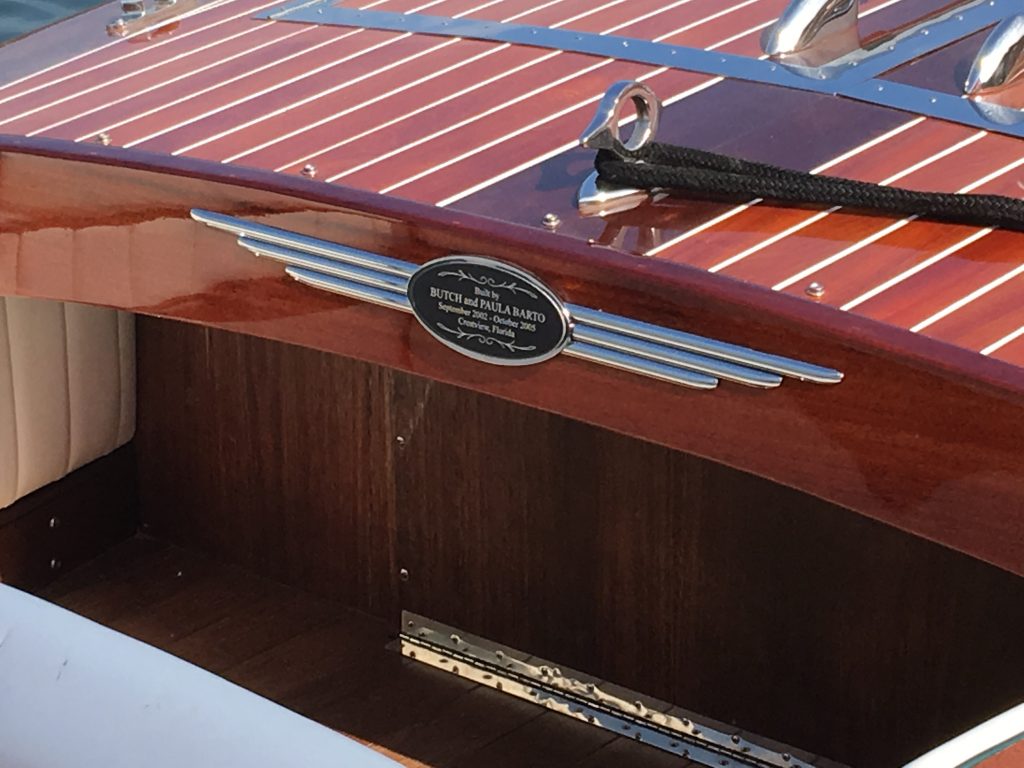 Tahoe by Butch Barto--it's all in the details.

Of course, seeing Roberta Hegy's Torpedo in person was truly a highlight. As many of you know, the Torpedo is the last boat my father designed. After it's release, some errors were discovered in some of the loftings. But Roberta was determined to build this boat because she fell in love with the design and because of her admiration for Glen's designs. All I can say is, if Roberta didn't build it, it would have stayed in our archives. But, with her expert help, the plans will be re-released soon. Most everyone on the Forum walked with Roberta through her build because she documented it step-by-step. We have all been amazed and impressed by her craftsmanship and woodworking skills. And the Torpedo certainly didn't disappoint! Wowie! 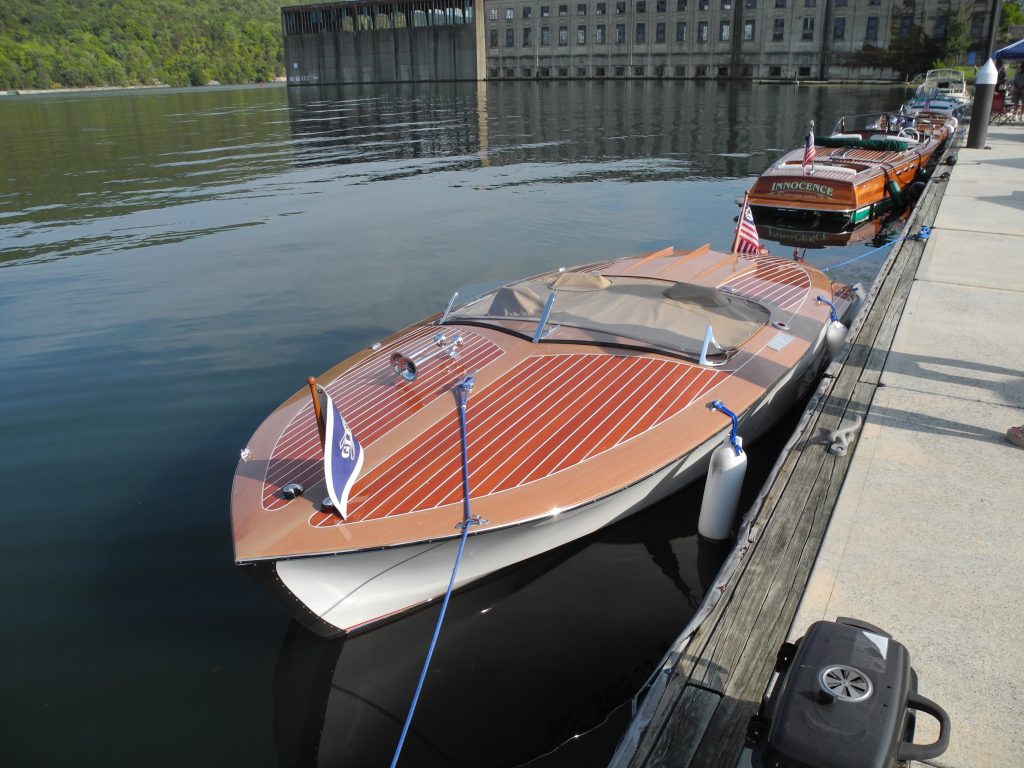 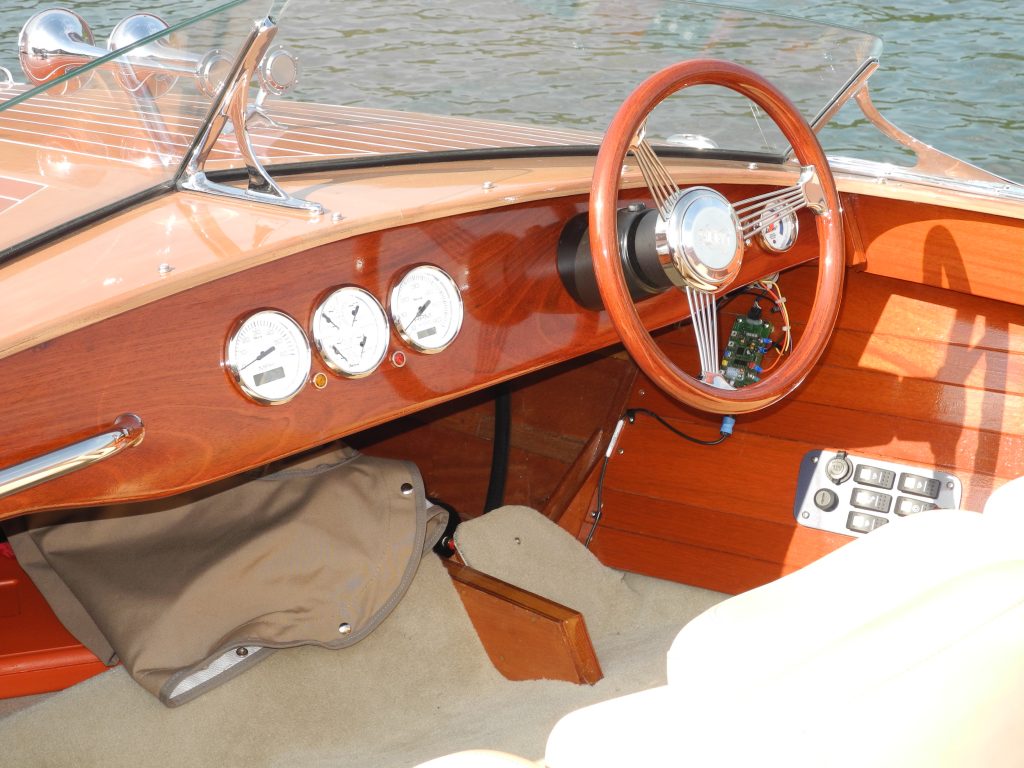 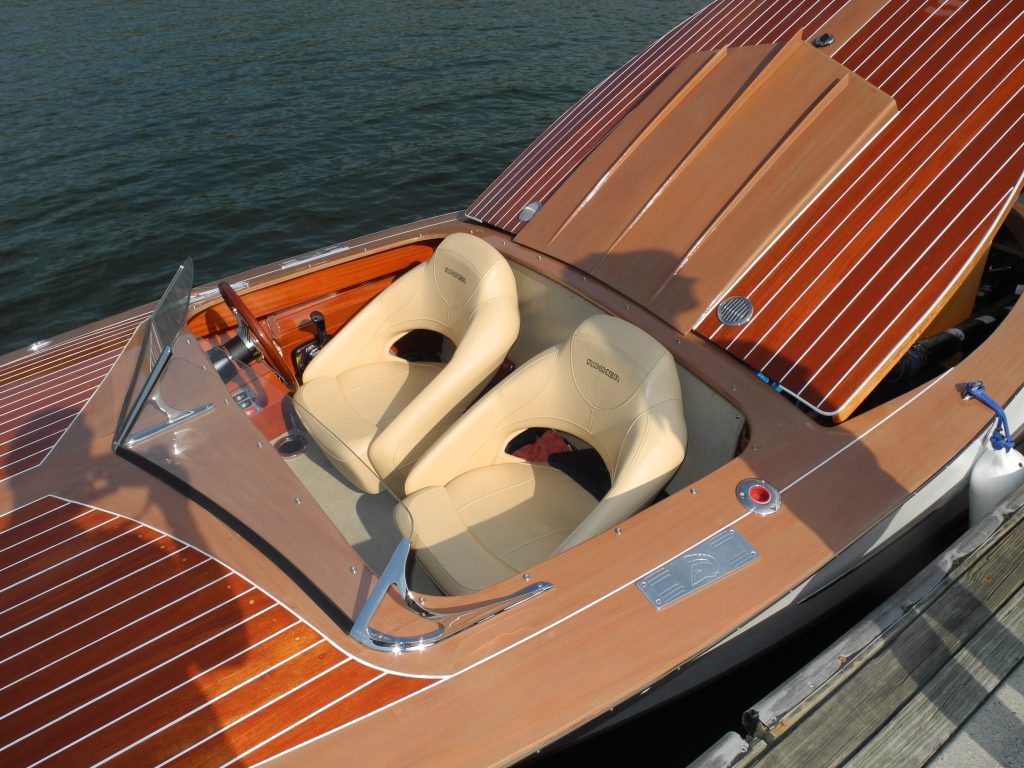 Other highlights were meeting Mark Coleman who has built many Glen-L boats and brought his Utility. I've talked to him by phone for years and this was the first time we met. Seeing Dave Fannon's Amp Eater in progress. It's great to see such enthusiasm for building a boat and that he brought it unfinished to share with all of us. Of course, Bill Edmundson's Bartender was amazing to see in person after following him on the Forum. And, BarnacleMike's Utility that he has documented on the Forum too. 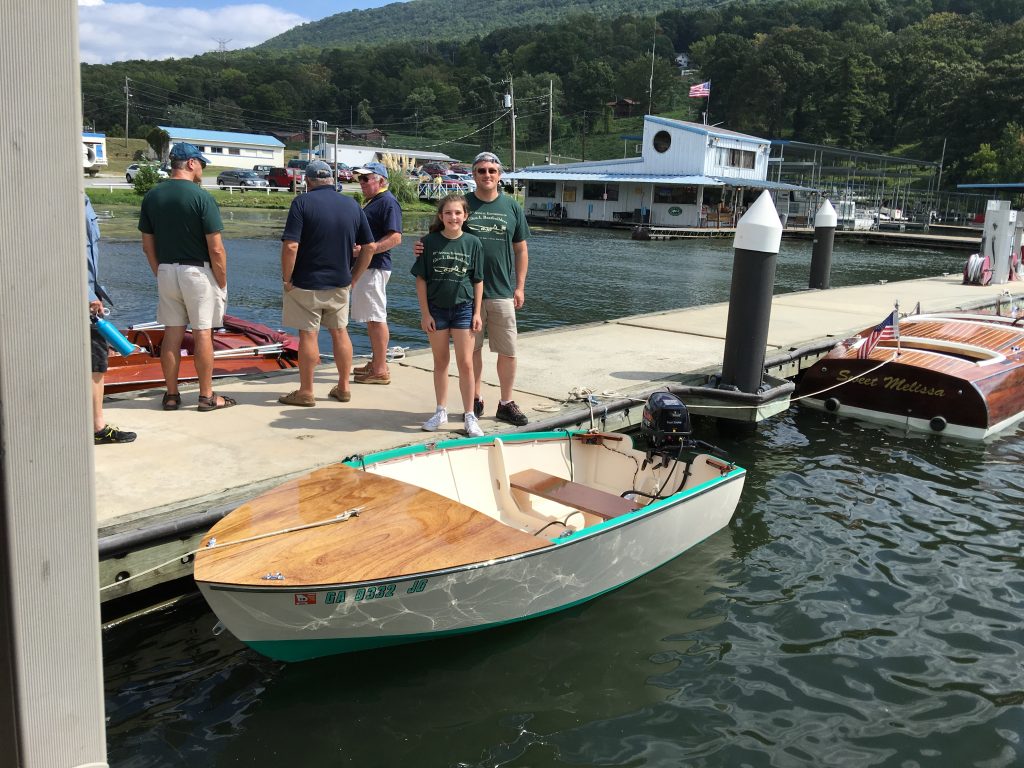 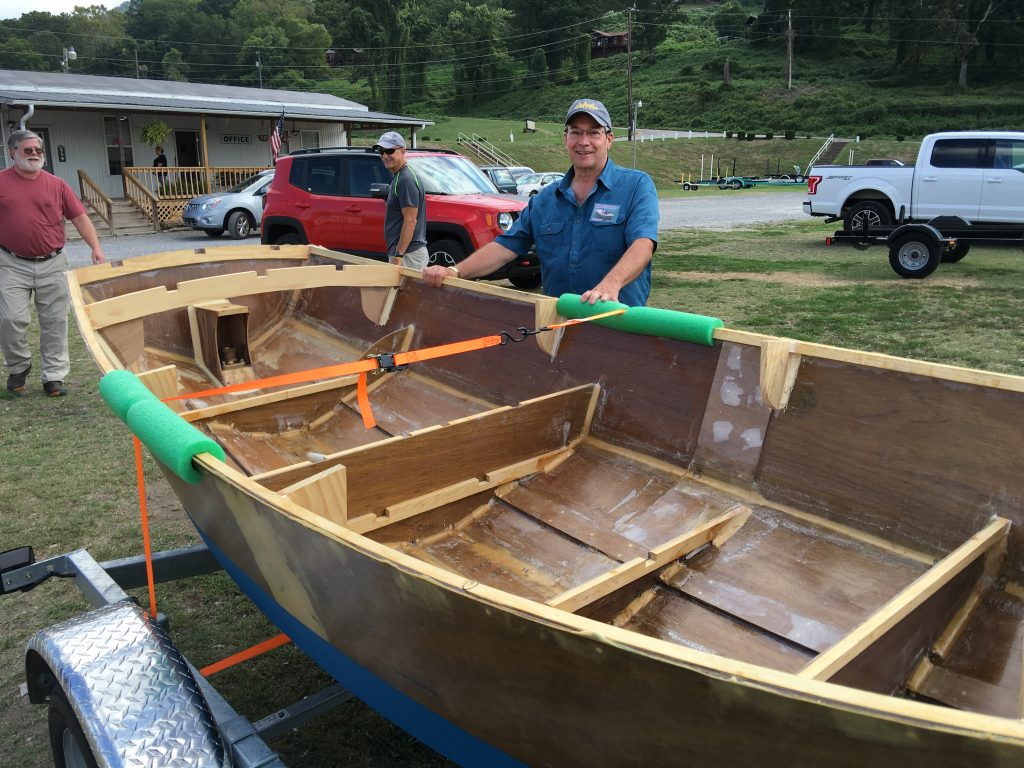 I'm not naming everyone and truly, you are all the greatest in my mind. But, I really didn't want to make this post too long and I already have! We'll get a G10 Gallery posted before too long as many of you are still sending photos, so we'll be able to brag on the rest of you too.

Saturday after another delicious dinner and desserts, we had our "awards" time and Bill & Lauren made that fun as always. All in all, it was a great time and from the feedback we've received, those who attended felt that way too. Thank you again to each of you who organized, cooked, helped and came to this year's G10. We truly appreciate you all!